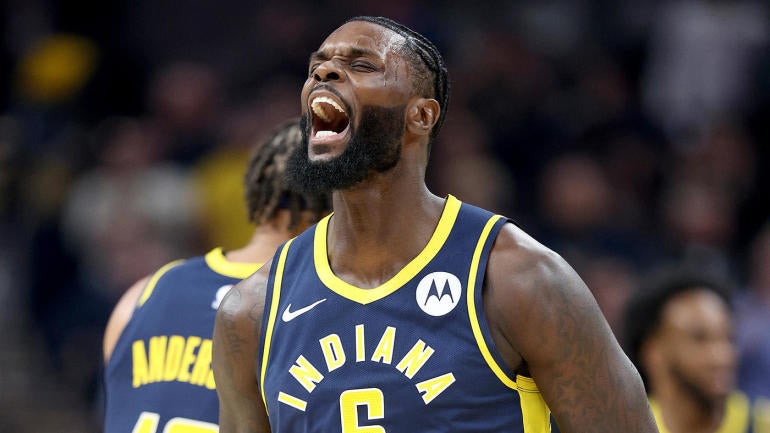 With all the COVID-19 cases in the NBA, a slew of players have been given a humble opportunity to play in the league for a minimum of 10 days. Lance Stephenson is a player who has received another chance after being out of the league for several years.

Stephenson was initially signed by the Atlanta Hawks for 10 days, and then the Indiana Pacers signed him for 10 days to start 2022. This is Stephenson’s third stint with Indiana, and he has looked like his old self.

The Pacers just recently waived Kelan Martin to open up a roster spot, and there is no doubt that Stephenson deserves that guaranteed roster spot in Indiana. These past two games against tremendous contenders in the Brooklyn Nets and Utah Jazz showed why the veteran should stick around, and NBA reporter Marc Stein says Stephenson is expected to get a rest-of-season contract.

Why Lance Stephenson deserves Pacers contract for rest of season

Malcolm Brogdon and Caris LeVert are typically tasked to handle the ball-handling duties for the Pacers, but they have been inconsistent and in and out of the lineup this season. Stephenson has the enormous confidence to handle the ball and constantly involve his teammates all throughout the game. Even if he did not start at point guard, Stephenson recorded a career-high 14 assists against the Jazz.

Although he sometimes has the tendency to commit boneheaded errors, Stephenson can still make a lot of exceptional plays. With the Jazz failing to contain his pick-and-roll play with Domantas Sabonis, Stephenson kept feeding Sabonis the ball down on the block en route to a career-high 42 points. With Brogdon still expected to be the primary playmaker, LeVert and Stephenson could alternate at the other guard position and become the secondary shot creator for Indiana.

2. Spitfire production off the bench

While Stephenson racked up 14 assists against the Jazz, the Pacers saw his scoring prowess off the bench in a tough loss against Brooklyn. The veteran put up 30 points on 12-of-19 shooting while also handing out five dimes. He even scored 20 straight points in the first quarter.

Stephenson won’t play as big a role when Indiana’s roster is healthy, with Brogdon and LeVert set to return soon from health and safety protocols. But it is obvious that Stephenson is still in tip-top shape as Carlisle played him 32 and 28 minutes, respectively over the past two games. The Pacers’ offense has been mediocre this season, so they could use a spark off the bench.

3. Veteran presence for a young team

With the Pacers struggling to the tune of a 15-25 record this season, they’re looking to make some big roster changes. But they reportedly don’t want to go through a full rebuild, instead preferring to just retool and try to remain competitive. There’s a good amount of talent on this roster, with almost all of it in their 20s.

Stephenson is one of just three Pacers in their 30s right now, and he has high-level playoff experience. The classic series pitting Indiana against the Miami Heat in 2013 and 2014 were the accurate representation of Stephenson’s impact and value on the team. His numbers do not tell the whole story, but there were games in which his hustle and desire to win were a tremendous help in the midst of a crucial series.

Stephenson’s veteran presence could be good for rookie Chris Duarte and other younger players on the roster.

With Stephenson’s 10-day deal expiring this week, the Pacers must consider bolstering their depth and bringing in tenured people to their lineup. It is a long shot for Indiana to even reach the play-in tournament this season, but this must be the start for them to retool and become a constant staple in the playoffs once again. One small step in reaching that goal is giving Stephenson this opportunity for the second half of the season and then possibly retaining him for 2022-23.