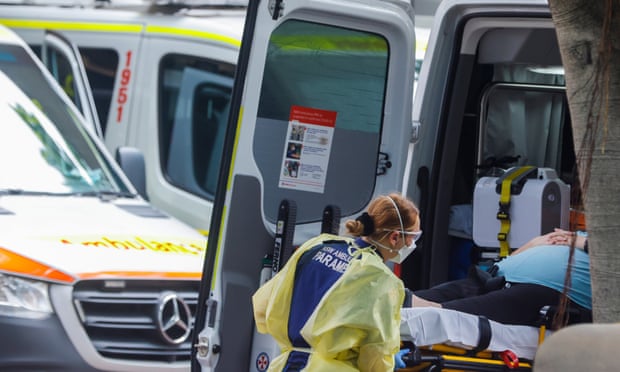 State government says it was preparing for sharp rise and it’s likely to be days before clearer picture of true count emerges. Some 53,909 positive rapid antigen test results were reported in the first six hours after a register became available on the Service NSW app.

The number of Covid-19 cases reported in New South Wales is set to explode on Thursday after more than 50,000 people registered positive rapid antigen tests on the government’s new app within six hours of it launching.

After the state recorded 34,759 new Covid-19 cases via PCR tests on Wednesday, the customer service minister, Victor Dominello, told radio station 2GB that 53,909 positive rapid tests had been registered since it became available on the Service NSW app at 9am.

The government has been preparing for a sharp rise in the number of Covid cases as it prepared for the launch, and it is likely to be days before a picture of the true count becomes clear. This is partly because people have been urged to register positive tests dating back to 1 January.

Of the more than 50,000 cases registered on Wednesday, 34,249 had come from the past seven days, with the remaining third dating back to 1 January.

“Look it is a big number [but] as you’d expect,” Dominello told 2GB.

“Covid is not just here in NSW, it’s in Queensland, it’s in Victoria, it’s in South Australia and all throughout Europe. It’s a pandemic.”

The government has placed increasing reliance on the use of rapid tests in a bid to ease the strain on the faltering PCR testing system, despite continuing reports of a shortage of stock.

But the premier, Dominic Perrottet, rejected suggestions people would not receive positive Covid results as a result of the shortage, noting that more than 135,000 PCR tests had been conducted on Tuesday and saying rapid tests would become “part of normal life” once supplies increased.

“I see the PCR test being complementary and continuing alongside the rapid antigen tests,” he said.

The shift to rapid testing has come amid increasing uncertainty around the reliability of Covid case numbers in NSW, after the government removed the requirement for people who tested positive with a rapid test to also receive a PCR test. It has also come as the government urged people not to get PCR tests unless they were symptomatic or a close contact in a bid to ease pressure on the system.

On Wednesday the chief health officer, Dr Kerry Chant, conceded the changes had been “confusing”.

“I know it’s been really messy, this transition has been quicker than we’ve ever wanted it to be,” she said.

The government announced on Wednesday that from 19 January, people who do not register a positive result face a $1,000 fine. The decision has been criticised as unworkable, and Dominello conceded it was mostly about “messaging”.

“We had two options [and] what we are trying to drive which is the lesser of two evils [is] demonstrating that it’s serious,” he said.

“If we didn’t have the fine then there’s probably going to be more people taking it less seriously.”