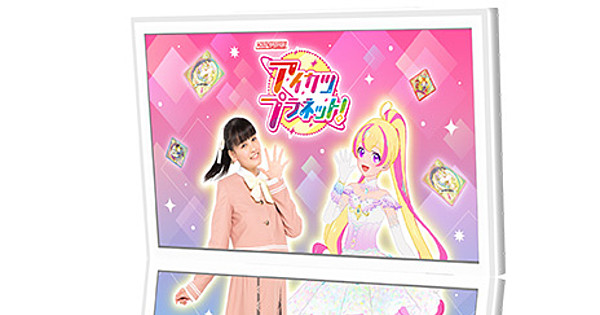 The story revolves around “Aikatsu Planet,” a world where anyone can assume the role of an avatar and become an adorably cute idol. Mao Otoha, an ordinary first-year student at the private academy Seirei High School, becomes the #1 idol Hana when Hana’s previous alter ego Meisa Hinata suddenly disappeared. However, Mao’s new role as the avatar Hana is a secret to everyone else. The tagline of the project is, “To become the ‘me’ I want to be, I enter the mirror.”

The Aikatsu! Planet seires premiered on January 10, 2021 and ended in June 2021. BN Pictures‘ Gekijō-ban Aikatsu Planet! film opened on July 15 alongside Aikatsu! 10th Story ~Mirai e no Starway~ (Starway to the Future, an apparent reference to the Japanese translation of the Led Zeppelin song “Stairway to Heaven”), the franchise‘s 10th anniversary film. The latter is spawning another new film that will open in early 2023.

The Aikatsu! franchise began with the original arcade card game in October 2012. The game inspired a television anime that ran from 2012 to 2016, and three anime films. The second entry in the franchise, Aikatsu Stars!, inspired a television anime that premiered on TV Tokyo and its affiliates in April 2016. Aikatsu Stars! received an anime film in August 2016.

The Aikatsu on Parade! television anime premiered in October 2019 with the new lead character Raki Kiseki and characters from the previous Aikatsu! anime series.