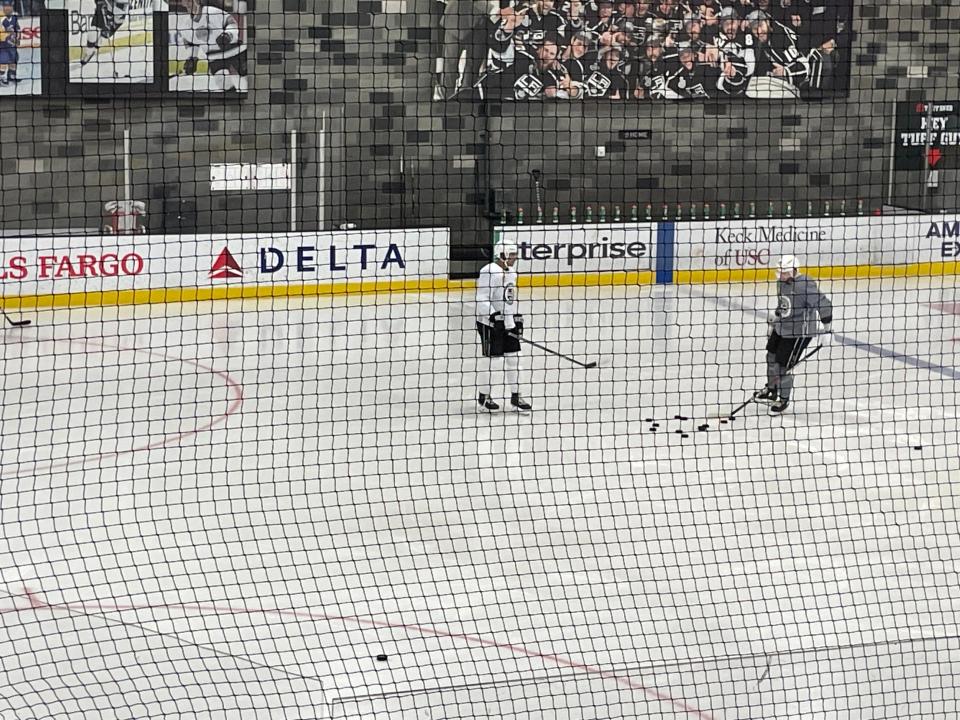 The former Detroit Red Wings draft pick, jettisoned by general manager Steve Yzerman in 2020, wasn’t available Saturday night when the Wings and Kings were scheduled to meet at Crypto.com Arena. Athanasiou took part in an optional morning skate, but McLellan, an assistant coach with the Wings from 2005-08, projected Athanasiou could return within a week.

“We’ve got to get this guy healthy and playing,” McLellan said. “He’s been a part-time player the whole season, right from training camp. He breaks his finger, then he comes back, then he’s got two groin issues. We need to get him consistently with our group and we need him to become an effective player. And he can be, but he hasn’t been because of injury.”

[ON THE MEND: On advice from Steve Yzerman, Jakub Vrana joined Detroit Red Wings on trip]

[ON THE BEND: Wings want Filip Zadina to value himself as more than a shooter. Here’s why]

Athanasiou, 27, has not played since Dec. 14. (He was not made available to reporters because he’s injured.) He has three goals and three assists in 11 games during his second season with the Kings; they re-signed him to a one-year, $2.7 million deal in July after a 10-goal, 13-assist 2020-21 season. As was the case when he was with the Wings, Athanasiou has shown flashes of All-Star caliber play. But it speaks to his inconsistency that he’s still on year-to-year deals.

“His skill has shown up,” McLellan said. “What I would say is that, as I tick off the boxes, they are going to be recognizable to fans in Detroit: Speed, puck skills, the ability to get in on the forecheck. What more do we need from him? Probably the same boxes — consistency. Now, consistency here is missing because of injury, not because he doesn’t want to play. But the consistency part of it has to show up for us. We’re counting on him. He’s a top-six player that can contribute, but we haven’t been able to get that from him yet.”

It was the lack of a consistently high engagement level that led Yzerman to trade Athanasiou in February 2020 to the Edmonton Oilers in a package deal yielding second-round draft picks in 2020 and 2021 and veteran forward Sam Gagner. Athanasiou, drafted No. 110 in 2012, had 154 points and a minus-75 rating in 294 games with Detroit, including a minus-45 in 46 games in the 2019-20 season with the Wings prior to the trade. Athanasiou began his Oilers career on a line with Connor McDavid, but when Athanasiou did not produce, he ended up on the fourth line; the Oilers declined to tender Athanasiou a qualifying offer soon after. On Dec. 28, 2020 — weeks before the pandemic-shortened 20-2021 season was to begin — the Kings signed Athanasiou for one year and $1.2 million.

“The contacts in Detroit and Edmonton, the two teams that he had been with prior, were comfortable ones for me to phone and ask for opinions,” McLellan said. “So we did do some homework there.”

The Kings saw what the Wings saw: A forward with blazing speed who was worth taking a gamble on.

“We’ve seen really good stretches where he’s been able to contribute on a nightly basis, and then it falls off, and then it comes back,” McLellan said. “Not unlike any other player, but I think it’s magnified when you see an individual of that much skill fall off of it. We’re trying to work with him, but injuries just have not allowed this player to be effective.”

Athanasiou’s projected return means he could face his former Wings teammates for the first time Feb. 2 when the Kings visit Little Caesars Arena in the final game before the All-Star break.