Angelina Jolie gets emotional as she advocates for U.S. domestic violence law 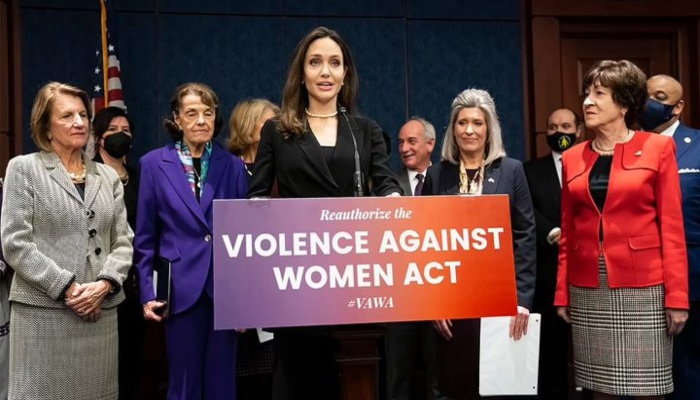 Angelina Jolie criticized Congress for not reauthorizing the bill in nearly 10 years.

Actress and humanitarian Angelia Jolie delivered am emotional speech at the Capitol Hill on Wednesday, as she was joined by a bipartisan group of senators to renew the Violence Against Women Act to control the domestic abuse in the country.

The award-winning actress, along with her daughter Zahara Jolie-Pitt, expressed support to the victims of domestic abuse – women and children at the press conference.

Jolie’s voice broke as she acknowledged the victims “for whom this legislation comes too late” in her speech in Washington D.C.

“Standing here at the center of our nation’s power, I can think only of everyone who has been made to feel powerless by their abusers by a system that failed to protect them,” said the 46-year-old actress.

“When there is silence from a Congress too busy to renew the Violence Against Women Act for a decade, it reinforces that sense of worthlessness. You think, ‘I guess my abuser is right. I guess I’m not worth very much.’ That’s why passing this law is one of the most important votes U.S. senators will cast this year,” said the Eternals star.

The Violence Against Women Act expired at the end of 2018 and U.S. President Joe Biden, who originally sponsored the bill as a senator in 1994, had campaigned on renewing it.

Meanwhile, ahead of her speech, Jolie, who has been appointed as a special envoy for the UNHCR, also shared an Instagram post and wrote, “Heading into the Senate’s introduction of the Violence Against Women Reauthorization Act, I’m grateful and humbled to join with dedicated advocates and legislators. I’m also glad to share in the advocacy with Zahara — and for her presence to calm my nerves before today’s press conference.”