Buchnevich has been steal for Blues 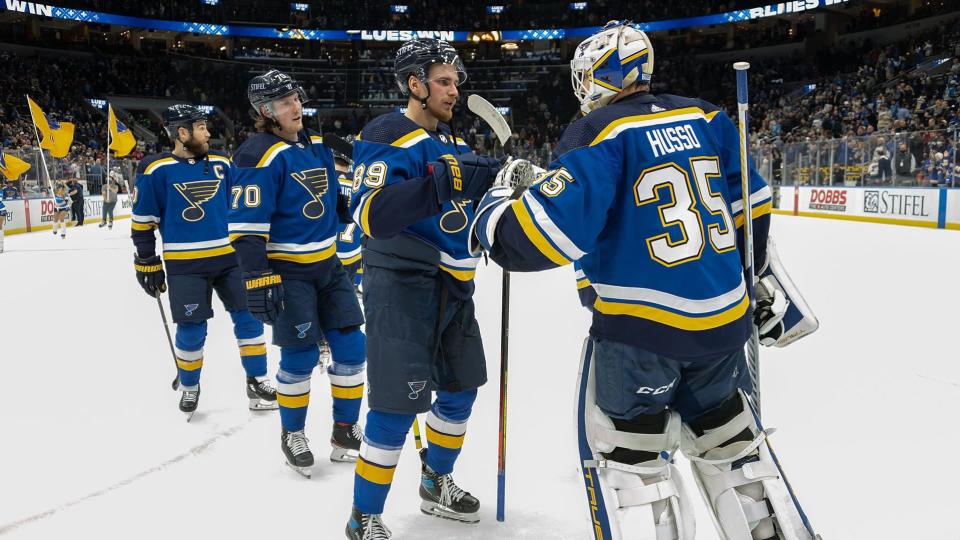 Top player in the NHL on Friday

The St. Louis Blues have been one of the best offensive teams in the league this season and there have been two big developments to help drive them there. The first is the return of a healthy Vladimir Tarasenko and his re-emergence as a top-line star. The other has been the offseason acquisition of Pavel Buchnevich who has proven to be one of the best trades made by any team. The Blues acquired Buchnevich from the Rangers for Sammy Blais and a second round pick and then signed him to a long-term contract extension. Thanks to his three-point effort (two goals and an assist) in the Blues’ 5-1 win over the Washington Capitals on Friday, he is now up to 13 goals and 20 assists (33 total points) in 32 games for the season. It has been a breakout year for a player that was probably very underappreciated — and probably under utilized — in New York before the trade. Friday’s game is already his 10th multi-point game of the season (including his second three-point game). He has six since the start of December, with all of those coming within the past nine games. He has multiple points in four of his past six games.

Highlights from around the NHL on Friday

The Blues put Friday’s game away with Ivan Barbashev‘s buzzer beating goal at the end of the second period.

It came in a losing effort for the Calgary Flames, but Johnny Gaudreau‘s breakaway goal was a thing of beauty. Look at that pass to set him up.

Brady Skjei had three points for the Hurricanes in their win over the Flames, including this goal late in the third period to help put the game out of reach after the Flames tried to make it close.

Three takeaways from the NHL on Friday

On Friday our James O’Brien took a look at the Carolina Hurricanes’ depth and why it is a big part of what makes them such a dangerous team. That depth was on display on Friday night in a 6-3 win over the Flames with five different players factoring into the goal scoring and 13 of the 18 skaters in the lineup recording at least one point. Andrei Svechnikov scored two goals in the win, while Derek Stepan, Tony DeAngelo, Brady Skjei, and Jesper Fast also found the back of the net. The Hurricanes’ win, combined with the Capitals’ loss, has them back in first place by total points while they still have a fairly commanding lead by points percentage. The Hurricanes are currently on a 126-point pace. The Florida Panthers are on the second-best pace at a 118-point pace.

The Blues have been one of the top teams in the Western Conference so far this season, and their dominance on home ice has been driving a lot of that success. With Friday’s win they are now 13-3-2 on home ice this season and are currently on an 11-game point streak in their building. It has been nearly two months since they lost a regulation game at home. Their next four games are on home ice.

The big story on Friday across the league was the Trent Frederic hit on Kirill Kaprizov that injured the Minnesota Wild superstar. He is going to miss Saturday’s game against Washington, while there has been no disciplinary hearing for Frederic for the hit. The Wild were extremely angry about the hit, believing it was a predatory and reckless hit that was not necessary. It is simply another in a long line of questionable plays this season that will not result in discipline from the league. There does not seem to be any consistency or reasoning for the decisions that get made in that regard from hit to hit.

Saturday’s schedule is full of awesome games. Early in the day the Pittsburgh Penguins try to extend their winning streak to 11 games when they play the Dallas Stars. There are also a couple of great matchups with the Toronto Maple Leafs visiting the Colorado Avalanche and the Florida Panthers taking on the Carolina Hurricanes in a pair of games featuring some of the league’s best teams. The biggest story though is in Vegas where Marc-Andre Fleury makes his first visit back to face the Golden Knights as a visiting player.

Adam Gretz is a writer for Pro Hockey Talk on NBC Sports. Drop him a line at phtblog@nbcsports.com or follow him on Twitter @AGretz.

NHL Rink Wrap: Buchnevich has been steal for Blues originally appeared on NBCSports.com