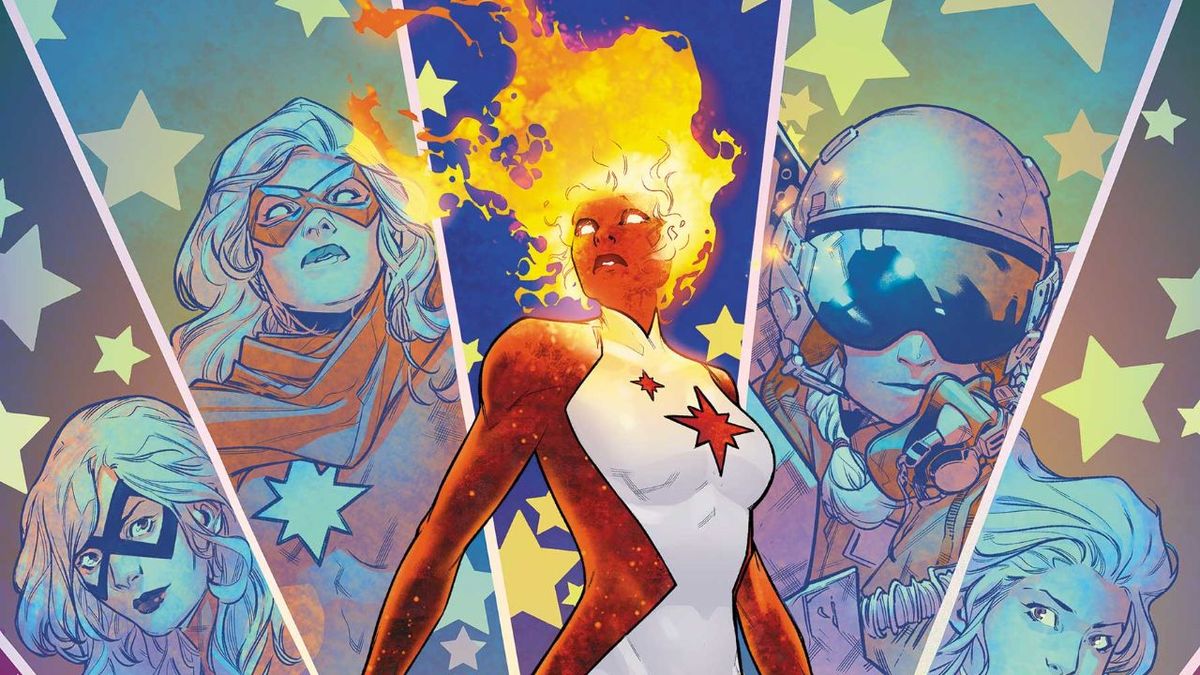 Living up to the character’s name, Carol Danvers’ Binary form is now a separate living entity in the Marvel Universe as of Captain Marvel #35. Now, May’s Captain Marvel #38 brings the newly birthed Binary into Carol’s world as an ongoing character – and judging by the story’s title, ‘Trials,’ getting to know a second version of herself may be quite challenging for Carol.

The newly incarnated version of Binary was created when Carol tried to use her powers to phase out of a prison created by the Kree villain Vox Supreme. Carol’s energy powers interacted oddly with the energy of the containment cell, causing her instead to split into two beings, with the Binary aspect of her powers becoming a sentient being all her own (with an updated look from artist Russel Dauterman, based on artist Dave Cockrum’s original designs, seen in the gallery below).

So who and what is Binary? Back in the ’80s, when Carol’s Captain Marvel powers were absorbed by Rogue in Avengers Annual #10, she was comatose and without her powers for some time. However, when she awoke, she ascended to a new cosmic form known as Binary with the power to directly channel the energy of a star and a new physiology to match.

Carol’s original powers eventually returned, and over the years, she’s occasionally tapped into the Binary power. However, now that Binary is a separate being, Carol will go missing in Captain Marvel #38, with only Binary left to find out what’s up with her.

“I’m really excited about this wild new arc for Carol and Binary – it’s called ‘Trials’ – and lemme tell you, these ladies are going through it,” Thompson states in Marvel’s announcement of Captain Marvel #38.

“Carol Danvers’ time as Binary was one of her most fascinating – and also one of her best and most powerful looks. And while Carol sometimes taps into that power – it’s a name and look that’s been just sitting on the shelf, unused – so we thought, why not have both?” she continues.

“There’s no reason we can’t have Captain Marvel and also Binary – and with that the wheels started turning on the creation of this awesome new character. It’s been such a fun ride so far and there’s so much more in store for her!”

Captain Marvel #38 is due out May 4. Stay tuned to Newsarama for Marvel’s full May 2022 solicitations, coming later this month.

Whether she’s going by Ms. Marvel, Warbird, Captain Marvel, or Binary, Carol Danvers is one of the best female superheroes of all time.