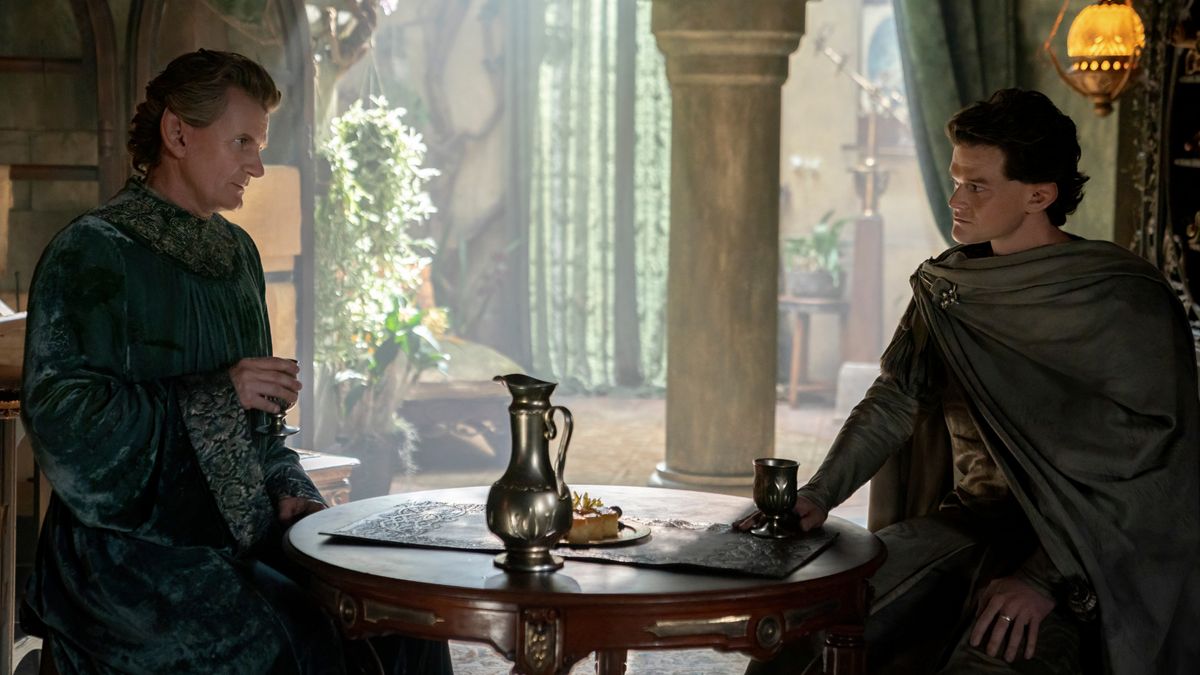 Warning: Major spoilers ahead for The Lord of the Rings: The Rings of Power episode 5! Turn back now if you haven’t seen the latest episode on Amazon Prime Video!

The Rings of Power episode 5 brings nothing but doom and gloom for the Elves. High King Gil-galad shows Elrond that their tree is being corrupted, meaning their own light is fading from them, and both Gil-galad and Celebrimbor are convinced that the only way to save all the Elves from death is the precious metal Mithril – which is being mined by the nearby Dwarves. Last episode, though, Elrond made a promise to his friend Durin that he wouldn’t tell anyone about the Mithril, so Elrond refuses to tell the Elves if the metal is in the mines or not.

But, when Elrond mentions the oath to Celebrimbor, the Elven smith starts telling the story of Elrond’s father, Eärendil. He went to the Valar, who are essentially gods, to ask for their help in the struggle against Morgoth. It was a dangerous quest that, in the writings of J.R.R. Tolkien, carried a death sentence. Ultimately, Eärendil was successful and his life was spared, and he now carries the Evening Star through the sky, as Elrond tells Durin in episode 4.

“I was there, Elrond, the night your father set sail,” Celebrimbor tells him. “A mortal man who believed he could convince the very gods to come to war in our aid. I heard your mother pleading with him not to go, asking him, imploring him, why, why must it be him? And do you know what he said? Because he was the only one who could do it.” The story has a visible effect on Elrond, and the next time we see him, he’s talking to Durin about the Mithril, so it seems this story of his father’s heroic exploits has changed his mind.

But… there’s a small problem with this tale, as book readers are pointing out. It just can’t be true if the story is sticking to the works of Tolkien. For one thing, at this point in the Lord of the Rings timeline, Elrond’s mother Elwing is actually a bird. A Valar transfigured Elwing after she jumped into the ocean to protect a Silmaril (a jewel containing the light of the Two Trees in Valinor).

Then, Elwing flew until she found Eärendil on his ship, and together they decided to sail to Valinor. So, there’s just no way Celebrimbor could have overheard Elrond’s parents before the journey, since they were both already at sea when they chose Valinor as their destination – and Elwing was a bird, which Celebrimbor would surely mention. They also went to Valinor together, so Elwing wouldn’t have been pleading with Eärendil to stay.

“Anyone else feel like Celebrimbor’s Earendil story is intentionally inaccurate to get Elrond to break?” asks one person on Reddit (opens in new tab), while another says (opens in new tab): “For real, he’s manipulating Elrond with every line of dialogue.”

Someone else (opens in new tab) thinks Sauron might already be at work: “I’m wondering if that meeting mentioned in episode one that Elrond wasn’t invited to wasn’t just them deciding he was to work with Celebrimbor. I’m thinking maybe Sauron/Lord of Gifts was there and that’s why the corruption starts right after. Something stinks in Lindon.” Lord of Gifts, or Annatar, is a disguise Sauron takes on to fool the Elves – and another theory has already explained how he could be working behind the scenes to manipulate the Elves already.

However, Elrond previously said his father “single-handedly” took the journey to Valinor, so either he doesn’t know the truth, or the show is omitting his mother’s role in the trip. Whether Celebrimbor is deliberately manipulating Elrond with a lie or if the show is making some changes to the tale remains to be seen. For now, though, it all seems very suspicious.

Check out our The Lord of the Rings: The Rings of Power release schedule to find out exactly when the next episode arrives in your time zone, and in the meantime, see our deep dives on Halbrand, the Stranger, and Adar for even more on the show.