Chiefs move atop AFC with win, eliminate Bengals, Patriots from race for No. 1 seed 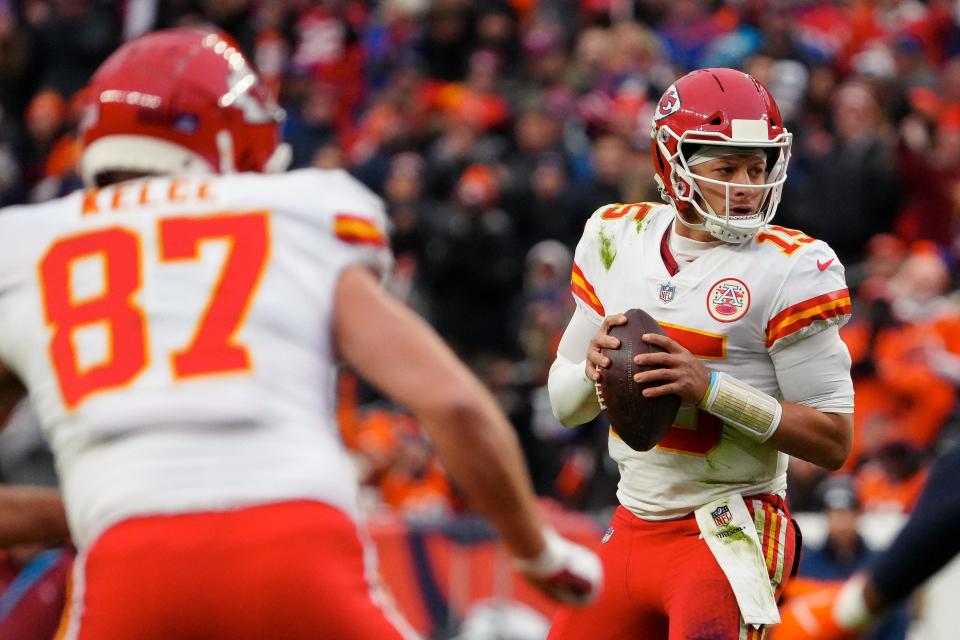 Here’s how the NFL playoff picture looks with Week 18 underway:

y – 1. Kansas City Chiefs (12-5), AFC West champions: Pulled out a win against Denver Broncos on Saturday afternoon, restoring them to first place in conference. But K.C. needs Houston Texans to complete season sweep of Titans on Sunday in order to claim No. 1 seed for the third time in four seasons. Remaining schedule: TBD

CLINCHING SCENARIOS: What remaining teams need to do to reach postseason

MORE: What will be the biggest surprises in Week 18 of NFL’s regular season?

x – 4. Buffalo Bills (10-6), AFC East leaders: They trail Cincinnati due to an inferior record in AFC games (6-5) but will win the division with a victory because their AFC East record (4-1) trumps New England’s. However there’s no scenario that gets Buffalo the No. 1 seed. Remaining schedule: vs. Jets

6. Indianapolis Colts (9-7), wild card No. 2: A win in Jacksonville finalizes a berth. The Colts can also back in with a loss if the Chargers and Steelers lose and Miami wins. Remaining schedule: at Jaguars

7. Los Angeles Chargers (9-7), wild card No. 3: They eliminated the Denver Broncos, Cleveland Browns and Miami Dolphins with their Week 17 win. But Bolts can’t afford to slip up in the regular-season finale, which is a must-win affair in Sin City. Remaining schedule: at Raiders

8. Las Vegas Raiders (9-7), out of playoff field: They’re officially into the Super Bowl tournament by beating Bolts at the Death Star on Sunday night. Silver and Black can also gain playoff entry if the Colts and Steelers both lose. Remaining schedule: vs. Chargers

9. Pittsburgh Steelers (8-7-1), out of playoff field: They remain on life support, but Monday night’s crucial win over Cleveland gives them a shot – one that requires a win in Week 18 combined with a loss by Indianapolis … while assuming the Chargers and Raiders don’t tie. Remaining schedule: at Ravens

10. Baltimore Ravens (8-8), out of playoff field: Losers of five in a row, their mathematical viability has dwindled to almost nothing. The AFC’s leaders just a few weeks ago, Ravens must win and hope the Chargers, Colts and Dolphins all lose to salvage a spot. Remaining schedule: vs. Steelers

x – 2. Los Angeles Rams (12-4), NFC West leaders: They’re only a win (or Arizona loss) away from beginning their quest to play Super Bowl 56 at SoFi Stadium … at SoFi Stadium. Remaining schedule: vs. 49ers

y – 3. Tampa Bay Buccaneers (12-4), NFC South champions: They’ve managed to climb back up to the third seed while simultaneously appearing to unravel amid Antonio Brown’s shenanigans. Remaining schedule: vs. Panthers

y – 4. Dallas Cowboys (12-5), NFC East champions: Saturday’s blowout of the Eagles didn’t improve their seeding. But Cowboys, given their 10-2 conference record, would climb to No. 2 if they wind up in a three-way tie with the Bucs and NFC West champions. Remaining schedule: TBD

x – 5. Arizona Cardinals (11-5), wild card No. 1: Will win NFC West if Rams cooperate with Week 18 loss and Cards get past Seattle. Remaining schedule: vs. Seahawks

x – 7. Philadelphia Eagles (9-8), wild card No. 3: Rested most of their key players in Saturday’s loss to Dallas. Will move up to No. 6 seed if New Orleans replaces San Francisco in NFC bracket. Remaining schedule: TBD