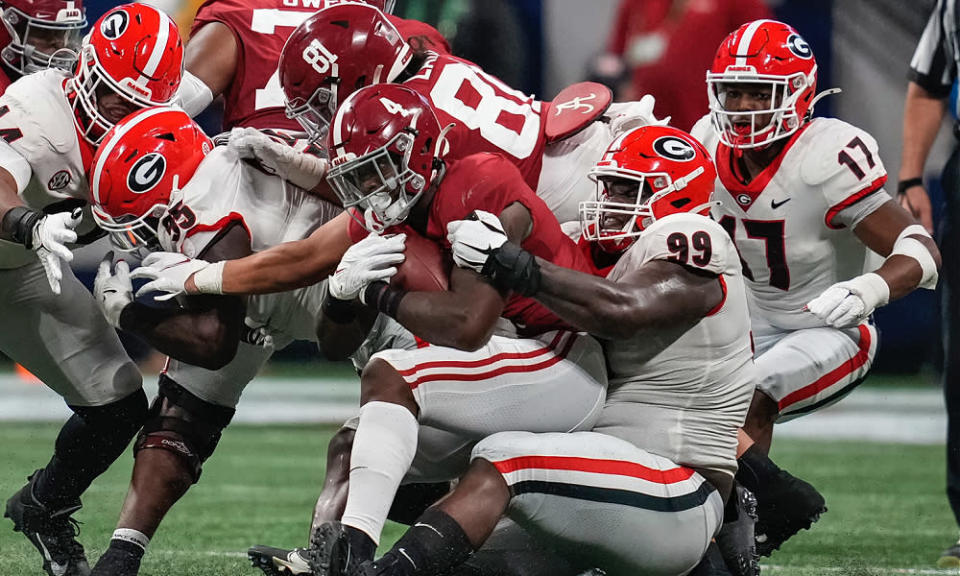 – Let’s do this again. Alabama was playing for its playoff life in the SEC Championship, was razor-sharp, explosive, and rolled to a 41-24 win back in early December. Bryce Young threw for 421 yards and locked up the Heisman, the slightly-maligned defense played one of its best games of the year, and the team earned the No. 1 spot in the College Football Playoff.

– Alabama was nice to Cincinnati. Rested, prepared, and focused, it had the game won after the opening drive in the 27-6 Cotton Bowl victory. Now it’s in the College Football Playoff National Championship for the sixth time in seven seasons – winning three of its previous five – as Nick Saban goes for his eighth national title overall.

Yeah, the “Alabama is in Georgia’s head” is part of the narrative. How do we know?

How good was your bowl? Ranking every bowl game

– Georgia trounced Michigan 34-11 in a College Football Playoff Orange Bowl semifinal that wasn’t even that close. The Dawgs players and coaches were all complimentary to the Wolverines and didn’t show a lick of disrespect after the game, but everyone had a faraway stare – it’s Alabama time.

Head coach Kirby Smart demanded to not be doused with Gatorade, the celebration was muted, and the team that was No. 1 and dominant for most of the regular season before the SEC Championship game instantly pivoted to the task ahead.

– 1980. Georgia finished the season 12-0 behind its freshman sensation running back Herschel Walker, closing out with a victory over Notre Dame in the Sugar Bowl for the national championship. It had another shot at a title in 1982, but lost to Penn State in the Sugar Bowl.

That was about it until coming so achingly close to getting by Alabama in Atlanta in early 2018, but over 40 years of frustration can finally be eased with one big win.

– The College Football Playoff needs this. Since this began, 13 of the 16 CFP semifinal games were relative blowouts, and after a terrific start with an entertaining Ohio State win over Oregon followed by three straight classics – Alabama over Clemson, Clemson over Alabama, Alabama over Georgia – the national championships have been total duds.

– America might be bored with more SEC teams, but Alabama and Georgia were the two best teams this season. Either Bama throws another national title on the pile and Nick Saban starts to push into John Wooden territory as – maybe – the greatest college coach ever, or Kirby Smart finally translates all the loaded recruiting classes and years of a program failing to finish the drill – to use a Mark Richt term – to make it six SEC teams to win a national championship in the BCS/CFP era.

NEXT: Why Alabama Will Win, Why Georgia Will Win, College Football Playoff National Championship Prediction

Why Georgia Will Win The College Football Playoff National Championship

Maybe it really was just as simple as Alabama needed it, and Georgia didn’t.

Of course Georgia wanted to win the SEC Championship. Of course it would’ve liked to have faced Notre Dame or Baylor or Cincinnati or – considering the seeding would’ve been different – Michigan in Indianapolis.

But at the highest of high levels, that sliver’s bit of a difference among teams with equal overall talent might have just been that Bama was playing to stay alive in the national title hunt, and Georgia was already in no matter what.

This time around, Alabama doesn’t have star WR John Metchie – who caught six passes for 97 yards and a score before getting hurt – and Georgia can fully focus on stopping Jameson Williams, who ripped it up with 184 yards and two scores the first time around. That all starts with generating more pressure into the backfield.

Georgia failed to sack Bryce Young and didn’t do much against the run behind the line, but it didn’t have a problem against the Alabama ground attack. Getting to Young is a must.

Give Alabama’s offensive line credit for coming up with its best performance of the season in the SEC Championship, but it didn’t keep the Cincinnati defensive front from getting to Young – at least a little bit – and pass protection was an issue at times throughout the season.

Georgia was among the best pass rushing teams in the nation this year. It didn’t register a sack – the only time this season it didn’t get one – against Alabama. The D was third in the nation in tackles for loss – it came up with a season-low four in the loss.

The Bulldog defense ramped up the pressure and intensity again in the win in the Orange Bowl, Nakobe Dean and company wore the Michigan backfield as a hat, and now this group should come out smoking.

NEXT: Why Alabama Will Win The College Football Playoff National Championship

Why Alabama Will Win The College Football Playoff National Championship

Maybe it really was just as simple as Alabama is just better than Georgia at college football.

Yeah, the Crimson Tide struggled against Florida, and LSU, and Arkansas, and needed a miracle to get by Auburn, and lost to Texas A&M, and …

When it was time to turn things up a few notches, it did it.

There were problems. The offensive line was too inconsistent, the defense had a strange way of taking some me time for stretches, and the ground game was hit-or-miss – but that’s all nitpicking.

It’s Alabama. The quarterback won the Heisman. The receivers are going to soon start for your fantasy team. The pass rush was incredible, RB Brian Robinson will have a long career in the NFL, and the coaching staff is peerless.

Will Anderson – 97 tackles, 17.5 sacks, 33.5 tackles for loss – and the defensive front live behind the line. Anderson got one of the team’s three sacks and two of the six tackles for loss in the first meeting, but as long as the D is generating pressure, it’ll be doing its job.

Georgia QB Stetson Bennett was fantastic against Michigan, and he actually has a better quarterback rating than Bryce Young, but he was pressed by Bama and threw two picks in the first game all season long with a wee bit of stress – JT Daniels played in the opener against Clemson.

Can Bennett hold up when he needs to come through in clutch moments? Georgia converted just 3-of-12 third down conversions against Bama.

Can the running game get going? It averaged fewer than four yards per carry and couldn’t take control.

Can Georgia get the shake the doubt once Alabama starts rolling for a stretch?

Don’t pick against Alabama in the national championship.

No, don’t. Seriously, you do NOT pick against Alabama in the national championship.

Clemson won the 2017 version in Tampa – yeah, yeah, yeah, Hunter Renfrow got clean on the game-winner because Artavis Scott wiped out Minkah Fitzpatrick on a pick play – but you weren’t wrong to pick Alabama

Clemson annihilated the Tide 44-16 in Santa Clara – and you weren’t wrong to pick Alabama then, either.

2020 Ohio State spent all of last season in desperate need of redemption against Clemson after losing the thriller of a College Football Playoff semifinal the year before.

Ohio State had the talent and the ability, but it got its win against Clemson – the next step was like playing with house money, at least from a national perspective.

Clemson was always laser-focused on Alabama. It fought the good fight in the 2016 loss, never looked away from the target on the way to winning in 2017, and brought the perfect attitude and gameplan to Santa Clara in 2019.

All of those Tiger teams were incredible, but they didn’t quite have Alabama’s otherworldly talent and depth at all 22 spots. They had transcendent quarterbacks and the right mix of star power to get it done twice.

Notre Dame had absolutely no prayer of beating Bama in the BCS Championship at the end of 2012, LSU ran into an all-time defensive brick wall in the 2011 season’s version, and Texas was done when it lost Colt McCoy right away in the Rose Bowl to finish 2009.

Oh sure, Alabama under Nick Saban has been involved in national championship games against unbeaten teams and No. 1 squads, but other than 2011 LSU, this is one of the few times it gets to deal with someone on its level of depth, talent, and five-star recruits all across the board.

Almost all of the top players on both sides could start for the other team – quarterback being the key exception. Bama can’t out-athletic or out-talent the Dawgs.

Georgia is right there with Alabama when it comes to recruiting, infrastructure, and ability. It just doesn’t have the trophies in the case.

Sticking with the call – the Georgia defense we saw all season long was going to show up large for the mini-tournament – from the moment the College Football Playoff pairings were announced, Georgia is the team of 2021, and it’s about to show it.

Alabama’s D will be amazing, too. Georgia will have a hard time moving the ball – especially after the initial adrenaline rush slows down – but the defense will hold serve time and time again.

There will be one giant Alabama big play for a score – and it might happen in the first five minutes – but the O will settle for field goal after field goal as the Dawgs will look and play like they have 14 defenders on the field as the game goes on.

This won’t be anything pretty, but it’ll be intense throughout – it’ll always feel like the dam is about to break at any moment and Alabama will take over – but no one knows better than Saban that destructive defenses win national titles.

No, you’re never, ever, ever wrong to pick Alabama.

Even if Georgia is about to win the national championship for the 2021 college football season.

How good was your bowl? Ranking every bowl game

Alabama vs Georgia Preview
Why Georgia Will Win
Why Alabama Will Win
Prediction, What’s Going To Happen, History