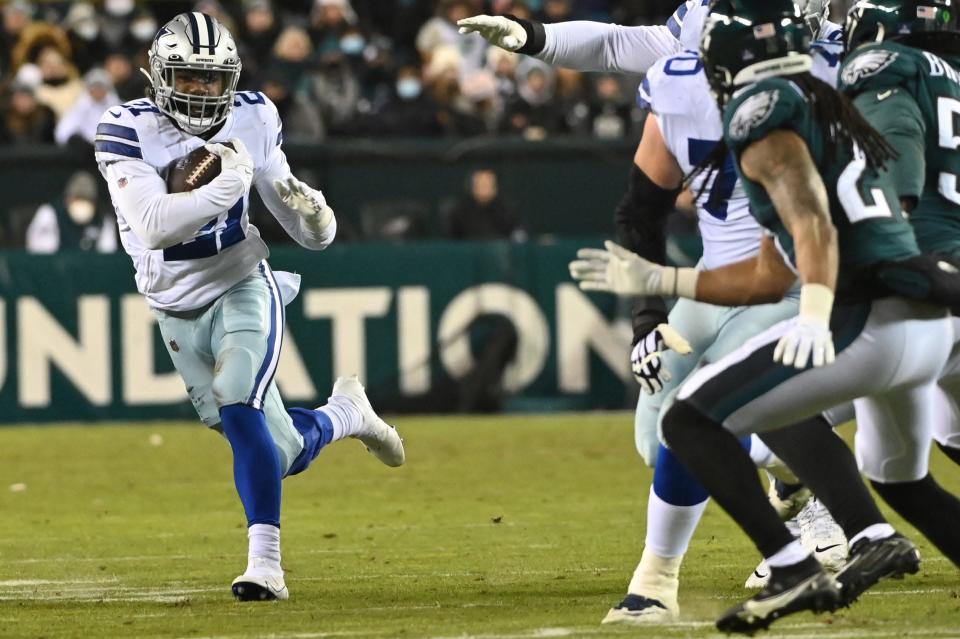 For the first time in 28 years, an NFL season has stretched into Week 18 – though back in 1993, the then-28 team league was experimenting with two bye weeks per club during the regular season.

Of course, circumstances are different now, the first 17-game regular season reaching its conclusion. Yet the NFL continues to tinker with its ever-evolving format, serving up a Saturday doubleheader for the 2021 campaign – the matchups were TBD when the schedule was unveiled in the spring and weren’t finalized until the completion of Week 17 – even though all 32 teams have played their regular-season finales on Sunday in recent years.

MORE: What will be the biggest surprises in Week 18 of NFL’s regular season?

Dak Prescott: Despite playing well into the second half – mostly against Philadelphia Eagles backups – the Dallas quarterback and other Cowboys mainstays avoided catastrophic injuries while finding needed offensive rhythm in a 51-26 victory. Prescott threw a career-best five TDs, giving him 37 on the season – a new single-season Dallas record.

Kansas City Chiefs: It wasn’t pretty, but they came back to beat the Broncos (for the 13th consecutive time) in Denver 28-24 – the win putting K.C. back atop the AFC heap, at least temporarily. The Chiefs need the Tennessee Titans to lose to the Texans on Sunday in Houston in order to claim No. 1 seed for the third time in four seasons.

College football fans: If you needed your appetite whetted ahead of Monday’s national championship game between Alabama and Georgia, ESPN’s Chris Fowler and Kirk Herbstreit called an NFL game for the second time in Denver. Gotta say, they sounded totally prepared and had a very smooth ride given this isn’t their day job. (Meanwhile, their Worldwide Leader colleague, Brian Griese, was putting Jason Kelce into the Hall of Fame on the first ballot, a kind notion … and almost certainly fantasy.)

Patrick Mahomes: He didn’t throw for 500 yards or five TDs – 270 and two were on par for his relatively more modest 2021 stat line – but did get the W while improving to 9-0 against Denver while running his record to 13-0 in AFC West road games.

Ezekiel Elliott: He needed all 17 games in what’s been a down season by his standards, but he hit the 1,000-yard rushing plateau for the fourth time in his six-year career.

Jason Kelce: His Hall of Fame bona fides aside – and the All-Pro center will likely be deserving of induction once his résumé is complete – he played one snap to extend his streak of regular-season starts to 122, the third-longest active streak in the league. Great player and leader and arguably the heartbeat of an Eagles team headed back to the playoffs despite quite a transformation since its Super Bowl victory just four years ago.

Ex-Charger Melvin (Ingram): Even though the three-time Pro Bowl pass rusher looks weird in jersey No. 24, he forced the fourth-quarter fumble that led to rookie LB Nick Bolton’s 86-yard scoop and score – a TD that put put Kansas City ahead of Denver for good.

Ex-Charger Melvin (Gordon): The Broncos running back was blown up by Ingram, his former teammate with the Bolts, coughing up the ball on the game’s pivotal play.

Travis Kelce: He caught a TD pass but was limping by game’s end, ESPN reporting a hip was bothering him. Not great if the Chiefs have to play next weekend.

Tyreek Hill: He hurt his heel in pre-game warmups and barely played. Not great if the Chiefs have to play next weekend.

Cincinnati Bengals: Eliminated from contentions as the AFC’s No. 1 seed by virtue of Kansas City’s win.

New England Patriots: Eliminated from contentions as the AFC’s No. 1 seed by virtue of Kansas City’s win.

Eagles: They still don’t have a win this season against a team that currently has a winning record … though the New Orleans Saints could change that Sunday.

Cowboys: Despite the win, they’ll need help Sunday to improve their No. 4 seeding in the NFC field. As it stands, Dallas would have to host either the Los Angeles Rams or Arizona Cardinals, who beat them in Week 17 at AT&T Stadium, in the wild-card round.

Vic Fangio: Was Saturday his final game as head coach of the Broncos? Denver was 7-6 following Week 14 and in the thick of the AFC wild-card chase … but didn’t win again. The Broncos are also looking up at the entire AFC West, finishing with a 1-5 division record. Fangio’s defense was typically solid, but his 19-30 record since taking over in 2019 is not – especially for a franchise desperate to return to postseason amid an absence that’s coincided with Peyton Manning’s retirement following Super Bowl 50.

NFL schedule makers: They unfailingly serve a great lineup of games every year, despite the endless array of considerations that must be navigated – especially now that the regular season has ballooned to 272 games. But Week 18 didn’t cooperate for the dramatic finish the league might have hoped for – and you have to wonder if the NFL was better off with the added incentive of two byes per conference rather than the 14-game playoff format, but I digress. Though the Chiefs remain in the mix for the AFC’s No. 1 seed, Saturday’s matchups were hardly must-see TV, especially for more casual fans without fantasy football implications to keep them interested. A shame Pittsburgh played Monday night, as Ravens-Steelers would’ve been a fantastic Saturday option – both teams clinging to playoff hopes and must-win scenarios this weekend. And maybe that’s the lesson for future Week 18 Saturday games: Seek matchups of teams outside the projected field in order to televise de facto playoff games heading into Sunday. There’s always next year.