Crucial P5 Plus SSD review: “A fast but affordable option” 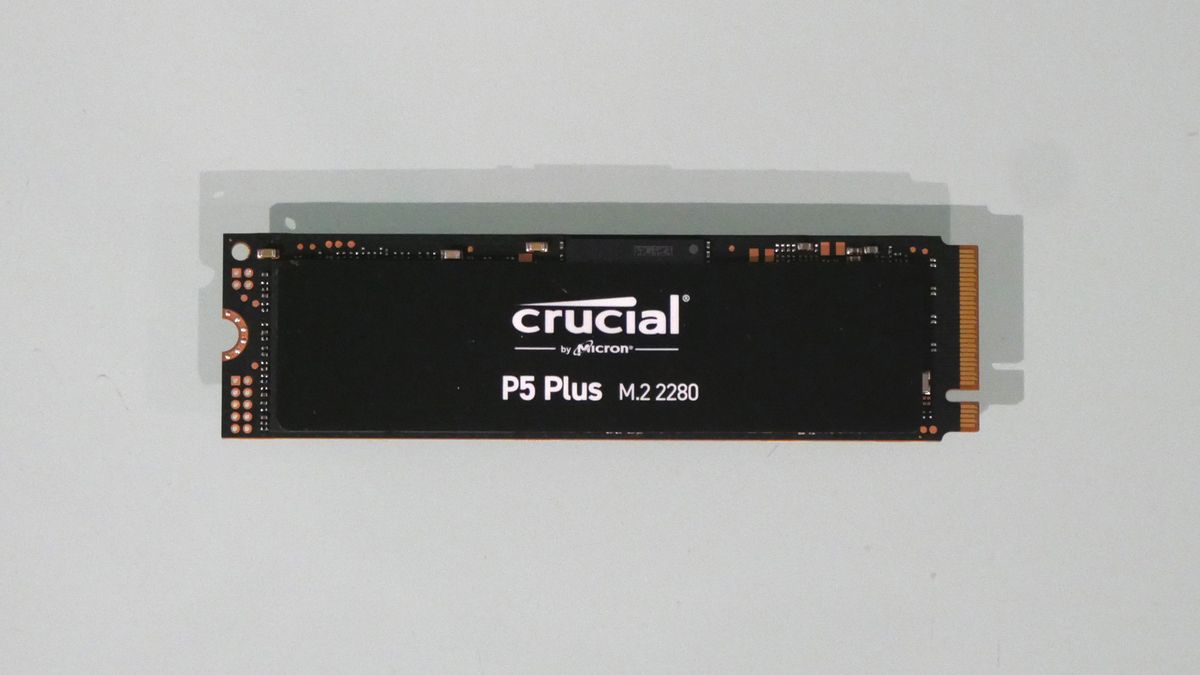 Give it up for the Crucial P5 Plus 1TB, Crucial’s first PCI Express Gen 4 M.2 SSD, and about two years behind the rest of the industry. Better late to the Gen 4 and best SSD for gaming parties than never? Definitely, especially if you are interested in getting the benefits of the speedy Gen 4 interface in a relatively affordable drive.

That’s true for owners of the best gaming PCs and best gaming laptops, and now Sony PS5 owners too. While the PC is compatible with countless SSDs, the PS5’s requirements are much narrower and the Crucial P5 Plus is one of the lowest-priced M.2 PCIe Gen 4 PS5 SSD options that are fast enough to make the grade.

Of course, it’s only fairly recently that any device, be that PC or console, has supported the latest and speediest Gen 4 version of the PCI Express protocol. This is probably why Crucial hasn’t bothered until now.

Crucial does all of its own homework in-house. In other words, it makes not only its own flash memory but also controller chipsets. It doesn’t just buy those bits in like a lot of SSD brands. The most obvious upside is that the Crucial P5 Plus sports parent company Micron’s latest triple-level flash memory chips, otherwise known as TLC memory. Micron reckons these new 176-layer chips are a big upgrade over the 96-layer stuff it has been making and supplying to the SSD industry. Improvements include more bandwidth, lower latency, and longer endurance.

More of a mystery is Crucial’s latest controller chip with PCIe Gen 4 support. Controller chips tend to be black boxes, so the lack of information isn’t unusual. All we can say for sure is that it’s an eight-channel chip, it’s paired with 1GB of DDR4 cache memory, and supports both hardware-based AES 256-bit encryption and high-speed SLC cache mode, the latter feature allowing a portion of the drive to be dynamically allocated to run in faster single-level-cell mode.

Anyway, as ever Crucial is aiming for a more mainstream product rather than going after the bleeding edge. So the headline specs of 6,600MB/s reads and 5,000MB/s for writes won’t scare the high-end competition. The same goes for random access. Crucial pegs the P5 Plus 1TB at 630K read IOPS and 700K write IOPS. Big numbers, but still bettered by the best, like the gang of drives based on the Phison E18 controller, including the Kingston Fury Renegade and PNY XLR8 CS3140, which are good for a million IOPS.

For the record, Crucial rates the P5 Plus 1TB at 600TB of write endurance and backs that with a five-year warranty, which should be enough for most users, and bundles both its own drive management software and Acronis Cloning, the latter coming in useful on the PC if you’re shunting an existing OS onto a new drive.

The latest crop of PCIe Gen 4 drives has pushed up expectations when it comes to performance. The Crucial P5 Plus is hardly a slouch, but can’t quite match them. Not with reads of around 6,800MB/s and writes of 5,000MB/s in CrystalDiskMark 7. It also isn’t the snappiest of performers when it comes to 4K random access performance at short queue depths. QD1 reads of 69MB/s and writes of 174MB/s are not terrible. But top-end Gen 4 drives like the Samsung 980 Pro, WD BLACK SN850, and PNY XLR8 CS3140 all do quite a bit better.

In terms of sustained performance, performance drops off after roughly 300GB of writes, very likely due to saturating the high-speed SLC cache rather than due to thermal throttling. That said, the P5 Plus hits 69 degrees C under load, which is a tiny bit higher than we’d like. It also suggests adding a compatible heat sink to this essentially bare M.2 2280 drive would be a good idea for slotting into the PS5. PC users will probably be fine as it is.

Overall – should you buy it?

Overall, the Crucial P5 Plus doesn’t set new standards. But it is attractively priced for a PCIe Gen 4 drive with proper TLC flash memory rather than that cheapo QLC stuff. It does run a little warm, which is more of a concern for the Sony PS5 than for PC. But we doubt it would actually cause any problems, especially with a heat sink applied. As a fast but affordable option for adding significant storage, the Crucial P5 Plus should be on your shortlist.