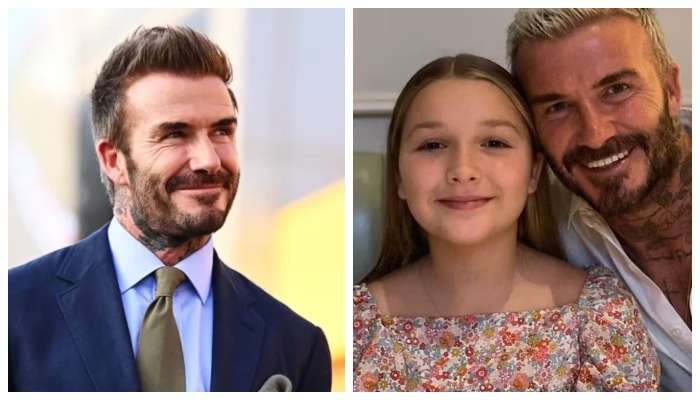 David Beckham, 47, teased daughter Harper, 10, as he shared a fun clip of their walk to school

David Beckham shared an adorable video on social media and has taken the internet by storm.

The 47-year-old shared a hilarious clip to Instagram on Thursday as he walked daughter Harper, 10, to school.

Harper, who wore a purple blazer over a striped uniform, complained to the camera that she faced a day full of ‘Maths, English, History, Geography and French’ as David giggled: ‘Are you excited?’.

In the clip, which he shared with his 72.9 million followers, David told the camera: ‘So me and Harper are on a lovely walk to school this morning,’.

The football legend, who is also father to sons Brooklyn, 23, Romeo, 19 and Cruz, 17, continued: ‘ ‘And we are talking about her lovely day ahead’.

Before asking his daughter: ‘Harper what’s your lovely day ahead?’.

As she bemoaned: ‘Maths, English, History, Geography and French’.

‘How excited are you?’ a cheeky David asked as his daughter grimaced for the camera.

After a pause with a silent Harper looking rather unhappy, David couldn’t control his laughter asking again: ‘How excited are you? Are you excited?’.

As the schoolgirl gave a half-hearted thumbs up, the former England captain collapsed into giggles, pulling a funny face for the camera.