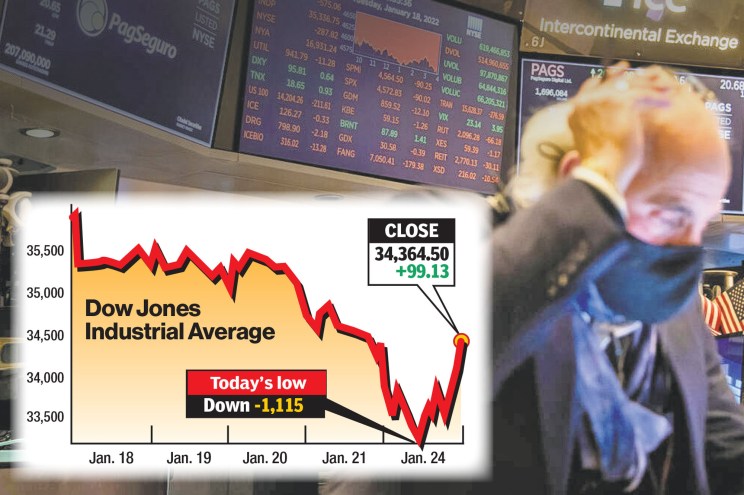 On a wild day on Wall Street, stocks ended the day higher with a stunning turnaround just before the closing bell. Stocks began the day with a dramatic selloff.

US stocks opened in the red as investors worried about the Federal Reserve’s plans to hike interest rates, tensions in Ukraine, earnings season and — of course — inflation.
At the low point of the session, the market was on track for its worst day since October 2020, with the Dow down more than 1,000 points.

But with just minutes to go in the trading session, the major indexes reversed course and turned green. The Dow finished 0.3%, or 99 points, higher.

What on earth happened to turn things around? The selloff may have just gone a bit too far.
“Investors may have gotten a bit too pessimistic about the growth outlook,” said Oanda senior market analyst Edward Moya in the late afternoon.
The S&P 500 (SPX), the broadest measure of the US equities market, also ended up 0.3%. During the session, the index had been on track to fall into correction. But it wasn’t meant to be, at least not on Monday: Last week, it logged its worst week since March 2020.
The Nasdaq Composite (COMP), which entered correction territory last week, closed up 0.6%.

The wild swings of the day were also visible in the CBOE Volatility Index (VIX), or Vix, which soared during the day but ended the session “only” 3.2% higher.
CNN’s Fear & Greed Index still flashed fear Monday afternoon, but the level was slightly less severe than on Friday.

Each day last week, stocks fared worse in the final hour of trading, which tends to be a bad sign for the next day, said TD Ameritrade chief market strategist JJ Kinahan.
“After a tough start for stocks in 2022, investors are looking for reasons to expect a rebound,” said Jeff Buchbinder, equity strategist for LPL Financial, in emailed comments.
“After more than doubling off the pandemic lows in March 2020, without anything more than a 5% pullback in 2021, stocks probably needed a break,” he added. “That doesn’t, however, make this dip feel much more comfortable.”

A lot to digest

Investors also have a lot on their plate this week.
Earnings season has moved on to Big Tech, including Microsoft (MSFT), IBM (IBM), Intel (INTC) and Apple (AAPL), which report results this week.

Then there’s the Fed meeting, concluding with Wednesday’s policy statement and subsequent press conference. As of Monday morning, market expectations for this week are that the central bank will keep interest rates near zero for a little longer, according to the CME FedWatch tool. But for the next meeting, which isn’t until March, expectations of a quarter-percentage-point rate hike were near 90% Monday afternoon.

Expectations are only part of the game. The Fed could also conclude that inflation has run too hot at the end of 2021 and crank up rates more — or sooner.

Treasury yields, which track interest rate expectations, were off last week’s highs Monday but inched higher in the late afternoon. The 10-year bond yielded 1.76% around the time of the close after climbing past 1.8% for the first time since before the pandemic last week.
While the Fed is trying to get inflation down by normalizing its pandemic-era policies, the US economy is grappling with the fallout from the Omicron variant. America’s private sector output growth slowed in January as the highly infectious variant put more pressure on the already-battered supply chain and existing labor shortage, according to the IHS Markit flash composite purchasing managers’ index.

Making matters worse, investors are anxiously watching the situation in Ukraine as fears mount that the country could be invaded by Russia.
The news that the United States and United Kingdom are withdrawing some staff from the local embassies isn’t exactly breeding confidence the situation will resolve quickly and European stock markets are sharply lower as well.

Commodities markets are feeling the pressure of the rising tensions and analysts believe oil prices could soar if the situation escalated. On Monday afternoon, however, US oil prices settled down 2.1% at $83.31 per barrel.