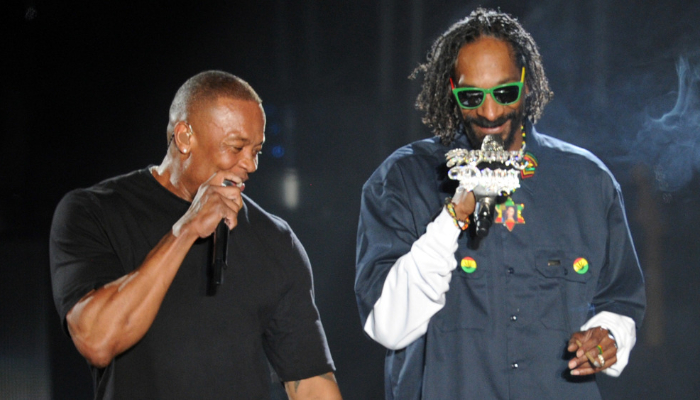 Dr. Dre and Snoop Dogg have vowed that their Super Bow show would create more opportunities for hip-hop

Dr. Dre and Snoop Dogg think the NFL was late embracing hip-hop and have vowed that their Super Bowl halftime show would create more opportunities for the genre, reported The Associated Press.

The hip-hop megastars are set to perform at the Super Bowl on Sunday and have promised to deliver a memorable show that will wow audiences and leave no doubt that rap music deserves a spot in the year’s biggest musical showcase.

According to Reuters, the star-packed lineup makes hip-hop the focus of the halftime extravaganza, and is expected to attract a US television audience of around 100 million people.

Some rap musicians have appeared in the past but shared the stage with rock and pop acts.

“We appreciate the NFL for even entertaining hip-hop because we know a lot of people didn’t want hip hop on stage. We’re here now and there ain’t nothing you can do about it,” Snoop Dogg said on Thursday at a discussion in front of media with Blige and Dr. Dre.

Seeking to appeal to a broad audience, the National Football League had often turned to rock and pop acts in the past, including Paul McCartney, Madonna, Prince and Justin Timberlake.

The league invited rapper Jay-Z in 2017 but he refused and told the New York Times that the NFL was still treating hip-hop like a fad.

He later partnered with the NFL in efforts aimed at advancing social justice, and his company, Roc Nation, is a producer of Sunday’s show.

“Hip-hop is the biggest genre of music on the planet right now, so it’s crazy that it took all of this time for us to be recognized,” Dr. Dre said.

“I think we’re going to go on and do a fantastic show. And we’re going to do it so big that they can’t deny us any more in the future,” he added, saying he hoped the performance would create opportunities for other rap musicians.

The five artists that will perform Sunday have a total of 43 Grammys, and 22 No. 1 Billboard albums.

Dr. Dre said he was thrilled that he will perform in his hometown in a game featuring local team the Los Angeles Rams, who will be battling the Cincinnati Bengals.

“I’m not trying to be egotistical,” he said. “But who else could do this show in LA?”