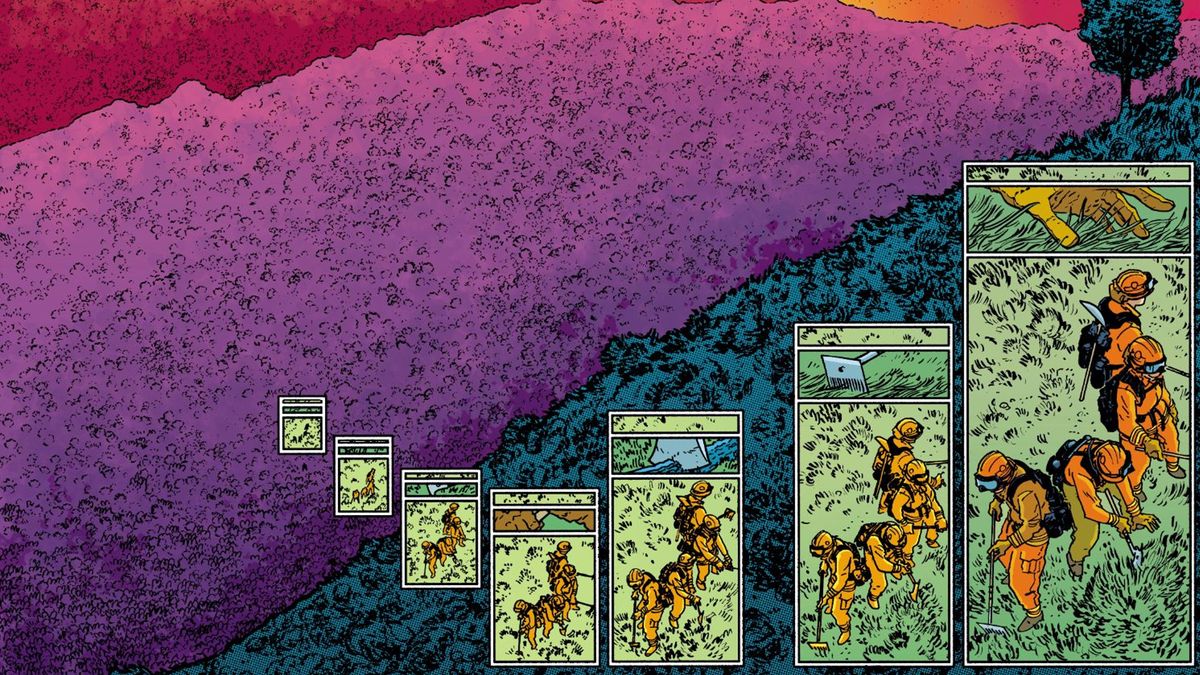 IDW Publishing kicks off its new line of original content in July, starting with the anthology series Dark Spaces. Writer Scott Snyder is spearheading the project, which will explore the choices people make when they’re placed in impossible situations. First in the series is Dark Spaces: Wildfire, a five-part heist story with art by Hayden Sherman, colors by Ronda Pattison, and letters by Deron Bennett.

Dark Spaces: Wildfire is set six weeks into the historic Arroyo fire in California, as it’s being fought by a crew of women inmates from a local prison. The newest recruit, who’s serving time for white-collar crime, convinces the rest of the squad to raid a former associate’s nearby abandoned mansion for cash and pawnable items. Each character is then faced with a moral dilemma: stay the course or risk everything.

“I hope [readers] gain an appreciation for the real people that spend time in this real-life Dark Space. Inmate firefighters are out there doing incredible work helping keep wildfires at bay as best they can, and I didn’t have any idea that was the case until Scott brought this story to me,” artist Hayden Sherman tells Newsarama. “I’ve learned a lot about it all since then and I hope readers will be moved to learn more as well. And to any wildfire firefighters who may read it, I hope I’ll have done a worthy job of depicting your day-to-day!”

Ahead of the release of Dark Spaces: Wildfire #1 in July, Newsarama readers can take a sneak peek at unlettered pages from the issue, seen below.

“There’s a two-page spread where I break down a character’s routine into incrementally smaller and smaller panels, and then blow it back up again that I’m very pleased with. It’s two pages of seemingly hundreds of panels that I hope come together to tell the reader something interesting about the character and the seemingly endless nature of routine,” Sherman says.

They also note their favorite moment: “Early on there’s a page where our main character coughs that I really love! It’s not the biggest moment, but that’s the page where the style and approach of this book fully clicked into place for me. I still feel it when I see the page: ‘This is it, this is the book!'”

IDW Publishing will release eight additional titles in its first wave of creator-owned books, including this summer’s TRVE KVLT.