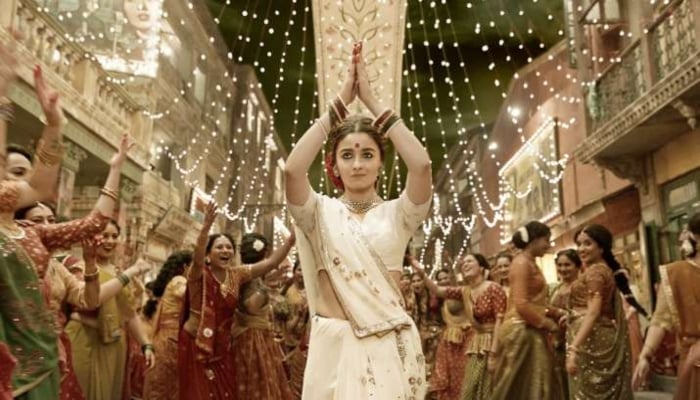 On Thursday, the makers have officially released the first track =, titled Dholida, from Gangubai Kathiawadi and fans cannot stop gushing over Alia’s stunning Garba dance moves in the song.

The Raazi actress also shared the first look of herself, dancing her heart out as Gangubai on her Instagram. In the music video, Alia, 28, is seen dressed in a gorgeous white saree and wearing dramatic bold makeup with heavy jewellery as she performs garba in the busy backdrop of Kamathipura area.

Sharing the video, the 2 States actress wrote in the cation, “An absolute dream come true to dance on SANJAY LEELA BHANSALI’s music. My heart forever beats to #DHOLIDA”

The actress has truly rocked her never-before-seen avatar of a mafia queen in director Sanjay Leela Bhansali’s drama film. Her fans could not help but laud her performance, dance and acting in the song.

The up-beat festive number has been sung by Jahnvi Shrimankar and Shail Hada and choreographed by Kruti Mahesh. Watch the song here.

Gangubai Kathiawadi is a biographical crime drama film that follows the real-life story of Gangubai, who was known as the most powerful women of Kamathipura, Bombay in the 60s.

The film also stars Ajay Devgn, Vijay Raaz in pivotal roles and is schedule to hit the theatres on February 25, 2022.