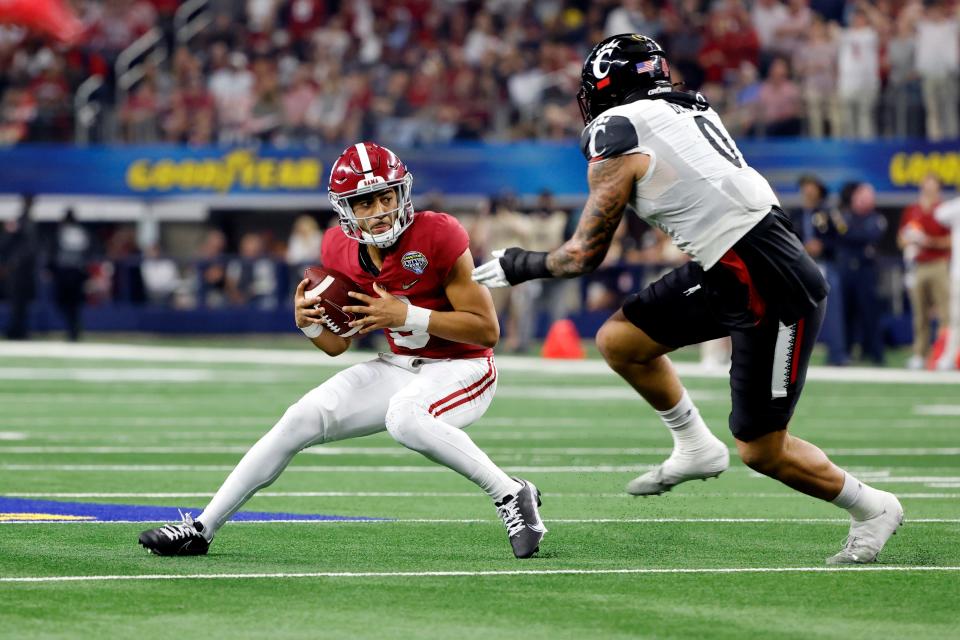 INDIANAPOLIS — Whether it’s escaping the people who made him, the cow, the horse or any other animal, few fairy tale characters have the elusiveness of the gingerbread man.

So, that nickname has been placed on the shoulders of quarterback Bryce Young by his opponents this week.

Georgia defensive tackle Jordan Davis said the Bulldogs were watching the Indianapolis Colts on HBO’s “Hard Knocks” when the Colts referred to Arizona quarterback Kyler Murray as the gingerbread man as he was running around.

Georgia decided to adopt that title for Young.

“That’s what we’ve been calling him all week,” Davis said. “Just seeing him run around our defense in the SEC Championship game, you have to tighten up.”

KEYS TO THE GAME: What will determine who brings home the hardware

“So trying to track down a wide receiver who is shifty, and I’m a defensive lineman, it takes a lot of skill and a lot of practice,” Davis said. “And it teaches you to track the hips. We’ve just been tracking hips all practice. And definitely this go-around we’ll try to contain him and get him.”

Last time around in the SEC Championship Game, Young passed for three touchdowns and rushed for another. Alabama defeated Georgia 41-24.

Georgia (13-1) will have another shot against Alabama (13-1) when the two teams face off at 8 p.m. CT on Monday at Lucas Oil Stadium in Indianapolis for the College Football Playoff championship.

Against the gingerbread man, the Bulldogs will try to do their best impression of the fox.