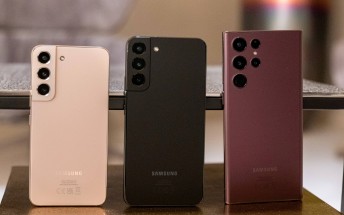 Samsung has produced a ton of freshly baked promo videos for all of its newly announced devices, and this is where you get to see them all. Let’s start with the Galaxy S22 Ultra, and specifically, its “Unveiling” video:

And then there’s the “Official Unboxing”:

Finishing off with the top of the line smartphone, there are two “Untold Stories”, the first about “Nightography”:

And the other one is all about “Vision Booster” and “Heat Solution”:

Moving on to the Galaxy S22 and S22+, their Unveiling video features the TV show Bridgerton… for some reason:

And to round off the phones we have a guide on how to apply a screen protector, for those who need it:

And another one entirely dedicated to the hot buzzword du jour, privacy:

Speaking of buzzwords: “Galaxy for the Planet” featuring BTS:

Now it’s time to move on to the tablets, first there’s an “Untold Stories” feature starring both the Galaxy S22 Ultra and the Tab S8 series:

Guess what? The S22 Ultra and Tab S8 Ultra are “Partners with The Batman”:

Then we get to the meat of things, with the Galaxy Tab S8 Ultra Official Launch Film:

And the longer Official Introduction for the top of the line tablet:

If an unboxing is what you want, here’s one “Official Unboxing” video for all three tablets:

And finally, the Galaxy Unpacked Highlights:

That’s it for the videos. If you’re interested in Samsung’s newly announced flagship smartphones, don’t miss our hands-on review of the Galaxy S22 trio.

5G services launched in India at IMC 2022 by PM Modi