Instant Pot Pro Crisp & Air Fryer vs Ninja Foodi 14-in-1 Smart multi-cooker: which should you choose? 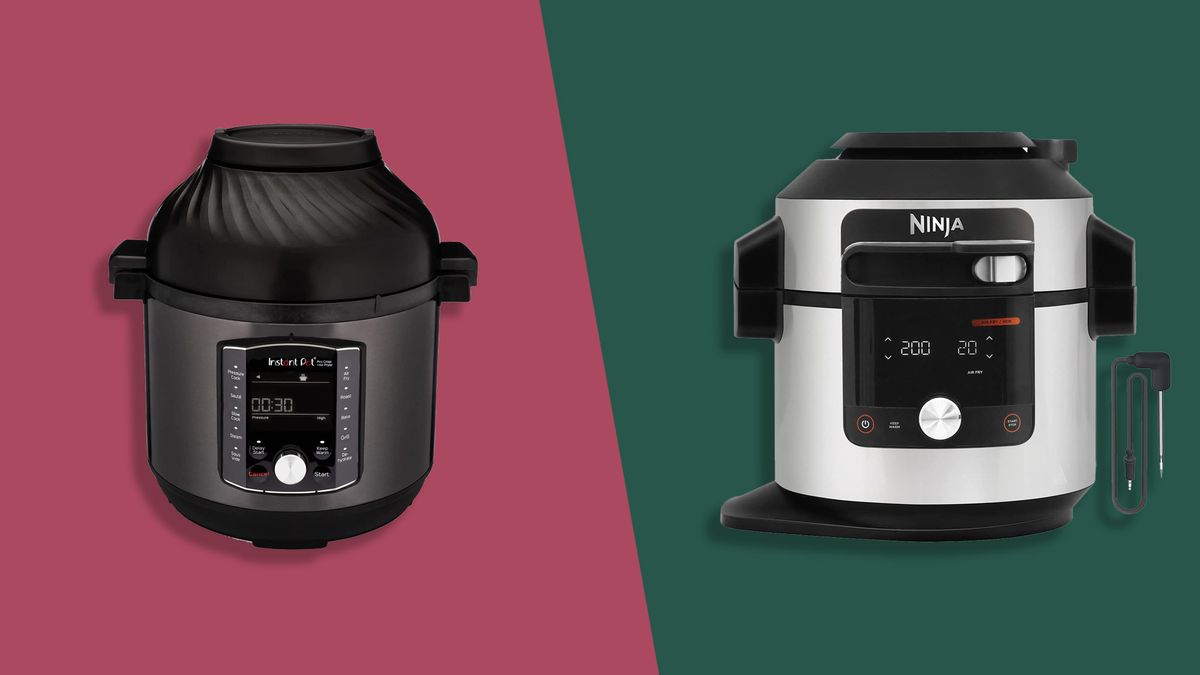 Multi-cookers have increasingly become the must-have kitchen gadget over the last ten years. Combining several appliances in one, you can ditch your slow cooker, pressure cooker, steamer, sous vide, and yogurt maker and combine them into one multifunctional appliance.

Instant Pot may have been the first multi-cooker on the market but it was quickly followed by several other brands, including Ninja which has become one of its biggest competitors. These two brands produce some of the best multi-cookers available right, and 2qwith each model they get bigger and better.

The Instant Pot Pro Crisp & Air Fryer is the brand’s top-of-the-range multi-cooker that adds air frying to the long list of cooking functions it offers, and was unveiled in 2021 (although it’s also available without the air frying capability, a model which is just called the Instant Pot Pro).

Ninja followed suit with the launch of the Ninja Foodi 14-in-1 8-qt. Smart XL Pressure Cooker Steam Fryer with SmartLid, which is known as the Ninja Foodi Max 15-in-1 SmartLid Multi-Cooker in the UK But how different are the top-of-the-range models from both of these trusted brands, and which should you choose?

We’re pitted the two head-to-head, whipping up curries, chillies, and batches of fries to help you choose the right appliance for your kitchen.

Read on to discover how these two multi-cookers compare – or, if you’ve already decided which of the two you wish to buy, check out the best prices for each right now:

Before we delve into how well these multi-cookers perform when it comes to producing an array of dishes, let’s look at the price.

The Instant Pot Pro Crisp is the more affordable of the two as you can get your hands on one for $249.99/ £249.99. Meanwhile, the Ninja Foodi 14-in-1 8-qt. Smart XL Pressure Cooker Steam Fryer with SmartLid, which is known as the Ninja Foodi Max 15-in-1 SmartLid Multi-Cooker in the UK is priced at $349.99/ £299.99. However, it does offer a handful more cooking methods (more about that below) and comes with a temperature probe for cooking meat perfectly, so we think this slightly higher price tag is acceptable.

Both models are the brand’s top-of-the-range multi-cooker so they sit at the pricier end of the multi-cooker market, but they offer the latest and best features including air frying capabilities. Neither model is currently available in Australia.

Despite offering a similar range of core functions, there are notable differences in the design of these two multi-cookers, the most obvious being the lids. The Instant Pot Pro has two lids, one for dry cooking functions such as air fry and bake, and an additional lid for the other cooking functions including slow cook, pressure cook, and steam. The Ninja on the other hand has just one hinged lid that can perform all functions, offering a more convenient and space-saving solution.

The UK model differs slightly from the US model and doesn’t have the sous vide function but comes with three additional steam programs;  steam meals, steam roast and steam bread.

In terms of capacity, there’s not much in it, the Instant Pot has an 8 quart / 8 liter capacity, while the Ninja is advertised as 8 quart / 7.5 liter. Likewise, you won’t find much difference in the measurements either, with the Ninja being 0.5 inches taller. But as we already mentioned, with two lids to store, the Instant Pot will take up more space in your cupboard.

For pressure cooking, the method and ease of steam release is an important consideration, and these two multi-cookers tackle this in very different ways. If you opt for the Instant Pot, the lid automatically seals for pressure cooking as you close it. But at the end, you’ll need to flick the switch to ‘vent’ in order to release the steam.

The Ninja also seals itself, it does this when the slider is moved into the pressure cooking position. The steam release however is fully automated and you can select one of three steam release methods for a completely hands-off process.

They come with a similar selection of accessories in addition to the main cooking pot, including air fry baskets and cooking racks. Uniquely though, a meat probe is included with the Ninja. This connects into the multi-cooker and the other end goes into the meat you’re cooking. On the main menu screen, you choose the type of meat, select how well you want it cooked, and the Ninja will do the rest. It’s a unique feature that we haven’t seen on any other multi-cooker.

While they differ in terms of design these two multi-cookers both produced excellent quality meals when we put them to the test. We made tasty slow-cooked and pressure-cooked meals in both cookers. However, we struggled to achieve the results we were looking for when steaming in the Instant Pot. Whereas the Ninja model comes with a useful recipe book that includes cooking charts, this takes away the guesswork and makes it easier to get it right the first time.

The additional functions available on the Ninja, such as steam air fry give you more scope to brown foods like chicken, whilst ensuring that the meat stays moist and succulent. What’s more, the included meat probe allows even novice cooks to produce perfect results. We successfully used it to cook a medium-rare steak and if you want hassle-free meats cooked exactly to your liking, this is a feature you’ll love.

While both come with dishwasher-safe cooking pots for easy cleaning, the Instant Pot is supplied with a stainless steel pot, whereas the Ninja pot is non-stick so is easier to wash by hand. Having said that, the Ninja pot doesn’t have a completely flat base, which is noticeable when sauteing because oil pools around the outside of the pot so results can be uneven. Instant’s cooking pot is completely flat so sauteing is more even.

Both multi-cookers are simple to use with clear display screens and easily adjustable time and temperature settings. And regarding the lids, it comes down to personal preference, some people will prefer just one hinged lid, but others may prefer a fully removable lid and not mind that there are two.

Both these multi-cookers are from leading brands, they’re well made, easy to use and produce great results. When deciding which is best for you, it’ll come down to your priorities. If price is driving your decision, the Instant Pot is the cheaper of the two and it still offers a great range of useful functions. But with two lids to store, it will take up more space.

But if you’ve been holding back because you’re nervous of pressure cooking and steam release, the hands-free automatic steam venting offered by the Ninja multi-cooker is a good way to go. And the Ninja is also the best choice if you want the maximum number of cooking functions for the most multi-purpose appliance. Not forgetting the innovative meat probe feature.

In a year of delays, this stomach-turning horror FPS will release early

In a year of delays, this stomach-turning horror FPS will release early