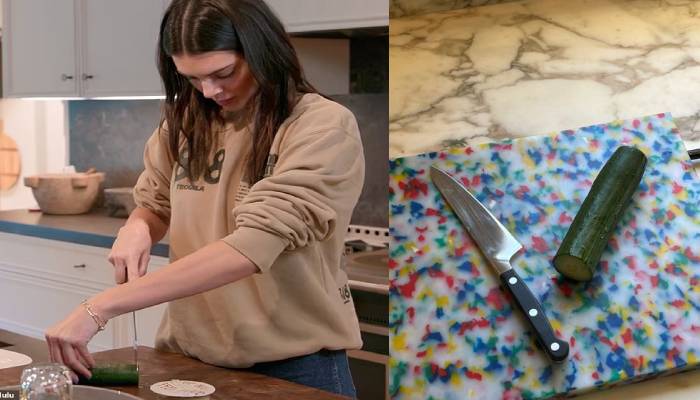 Kendall Jenner seems to work on her “cucumber chopping skill” and her latest photo on Instagram has been the proof.

On Thursday, the supermodel turned to IG story and posted a photo of a sliced cucumber and a gleaming chef’s knife on a colourful cutting board.

She quipped in the caption, “Here we go again.”

Earlier this month, the reality star was ridiculed on social media for not being able to chop a vegetable properly, which she confessed in an episode of The Kardashians.

In the clip, Kendall came to meet her momager, Kris Jenner, after which the 26-year-old decided to make herself a snack.

Interestingly, the awkward way she held a knife to cut a cucumber left everyone in stitches. Her clip garnered millions of views on social media.

What’s more was that two of her sisters, Kylie and Khloe Kardashian, also made fun of her “culinary skills” whereas the former called her out as “the cucumber girl” in a recently shared video from Kourtney Kardashian and Travis Barker’s wedding.

Meanwhile, two days ago, Khloe spoke on the Not Skinny But Not Fat podcast and offered her sister to give some “chopping lessons”.