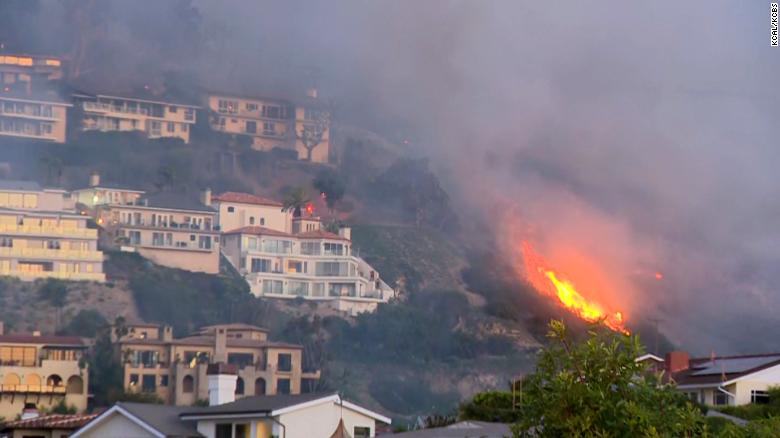 Residents in the Irvine Cove and Emerald Bay areas of Laguna Beach were placed under an immediate evacuation order due a brush fire that is threatening homes and other structures, officials said.

The blaze, dubbed the Emerald Fire, covers 150 acres and is 10% contained, according to a tweet from the Orange County Fire Authority.
An evacuation warning will remain in place while police and fire personnel patrol the area for hot spots; residents are advised to stay on heightened alert.
Laguna Beach officials warned that residents may return to homes without power as Southern California Edison has not yet received the “all clear” to re-energize power lines. Approximately 375 firefighters have been tackling the flames in unseasonably high temperatures, with five helicopters assisting the effort.
The Pacific Coast Highway reopened at midday after being closed in both directions for about five hours. All schools were closed in North Laguna.
“I want to thank our city team who has been working since 4:30 a.m. this morning to stop this fire in its tracks, and while we are tired we are happy with the outcome,” said Laguna Beach City Manager Shohreh Dupuis in an update on the city website.
A winter heat wave has prompted a heat advisory for Southern California through Sunday, with temperatures reaching the mid-80s each day. Offshore winds and extremely dry air, combined with the heat, have created conditions ripe for brush fires.
We no longer have a fire season, we have a fire year,” said Orange County Fire Authority Chief Brian Fennessy. “It’s February 10 and it’s supposed to be the middle of winter, we’re anticipating 90-degree weather.”
Fennessy said the last time the area burned was in 1993.
Farther north, a 2-acre blaze dubbed the Sycamore Fire is burning in Whittier, making an uphill run in medium to heavy fuels, with multiple structures threatened, LA County Fire tweeted. By 5 p.m. Thursday, the fire had destroyed two homes and one home was damaged, LA fire officials said.
The fire has been upgraded to a two-alarm fire, with more than 200 firefighters assigned. A firefighting airplane has been requested to assist.
A third fire dubbed the Imperial Fire became visible from the 405 Freeway in Hawthorne on Thursday afternoon and drew in firefighters, who quickly got the upper hand.
The Imperial Fire was held to about a half acre, as firefighters stopped its forward progress just after 2 p.m. local time, LA County Fire said, noting that firefighters remain in place mopping up hot spots.
Share
Facebook
Twitter
Pinterest
WhatsApp
Previous articleOur Moto G51 5G video review is out
Next article[Video] DaBaby and His Crew Physically Attacking DaniLeigh’s Brother at Bowling Alley