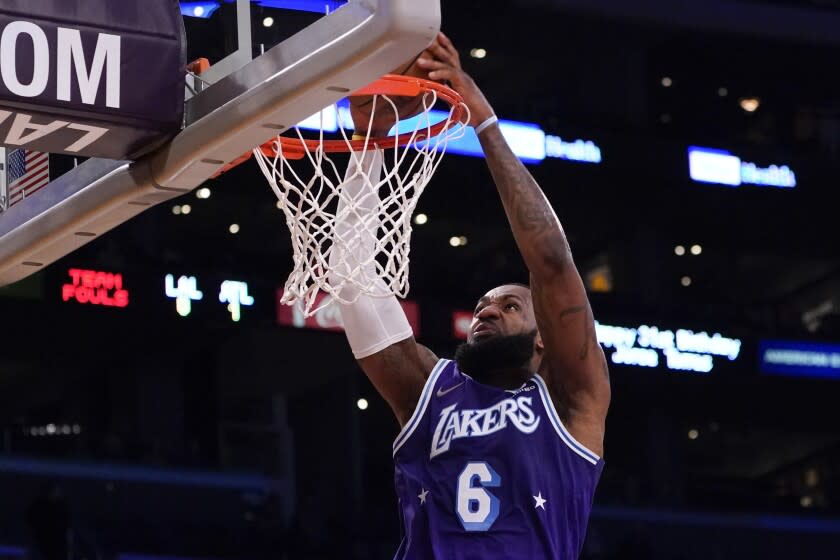 “Strictly buckets,” Malik Monk interrupted, answering the question before it could even be fully asked.

See, Monk’s left arm is heavily tattooed, the ink on the front and back of his skinny limb. But his right? It’s blank, the 23-year-old guard following Nick Young’s advice to keep that shooting arm untarnished.

Against the Atlanta Hawks on Friday night at Crypto.com Arena, Monk was strictly a bucket, splashing home jumper after jumper as he scowled and flexed like he was the biggest player on the court.

Monk scored 21 points in the first half to set the Hawks up before LeBron James put them away, leading the Lakers to a 134-118 win.

James followed up Monk’s monster first half with 23 in the second to give him 32. It’s the ninth time in the last 10 games James has scored at least 30.

The vibes inside the building were as good as they’ve been all season, the Lakers well on their way to their fourth win in a row, with highlight plays forced by their swarming defense pushing the crowd into a frenzy.

The building bounced as the Laker Girls danced to Dua Lipa’s “Levitating” moments after James floated to catch a lob from Talen Horton-Tucker on a fast break triggered by a perfect Russell Westbrook bounce pass.

Horton-Tucker finished with 21, and Westbrook had 13 assists and 11 rebounds before fouling out.

Fittingly, Monk punctuated his best game of the season with a two-handed put-back slam. He finished with 29 points.

The win moved the Lakers (21-19) two games ahead of .500 for the first time since Dec.15. It’s also the team’s first four-game winning streak of the season.

The Lakers probably couldn’t even think about .500 basketball without Avery Bradley, whom the team signed this preseason after he was the Golden State Warriors’ final cut.

His willingness to play pressure defense with sincere effort and consistency was even more obvious considering so many of the team’s best defenders found themselves either traded or left to sign elsewhere during the postseason.

Guaranteeing the rest of his one-year contract, which the Lakers did Friday, was one of the easiest decisions the team has made this year.

“Obviously, you start your season out a certain way and you find ways to enhance it throughout the course of the year,” Vogel said before the game. “We were able to pick up Avery I think right before the beginning of the season without much of a training camp, and he hit the ground running with us, obviously having a little bit of a background in our system, being here a few years ago, played extremely well for us, deserved a starting role.”

While Vogel can say, like he did before the game, that the Lakers would’ve found another player to try to harass the opponent’s best scoring guard, only Bradley has shown the ability to go out and do it. And even if some of the advanced metrics have been unkind to him at times this season.

“Tenacity is contagious. Intensity and playing hard is contagious,” Vogel said before he had Bradley shadow Trae Young. “And knowing that you’re OK on certain matchups against elite offensive guards coming in here, it’s almost necessary. … To win in this league, it’s necessary to have somebody that can hold his own and then some against the elite guards.”

The team also guaranteed rookie Austin Reaves’ contract for the rest of the season. The Lakers also got Stanley Johnson back in their starting lineup after re-signing him via a 10-day contract to fill the vacant roster spot created by their Rajon Rondo trade.

The Lakers countered with quickness, forcing turnovers and getting out into transition. James, left to patrol the paint with Anthony Davis still nursing a knee injury, repeatedly slapped the ball away from the Hawks’ bigs.

With his fourth steal of the game, James moved into the NBA’s all-time top 10.