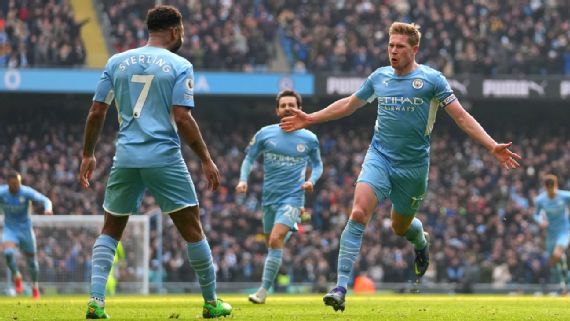 A stunning strike from midfielder Kevin De Bruyne helped Manchester City to a 1-0 win over Chelsea on Saturday as Pep Guardiola’s side increased their gap at the top of the Premier League table to 13 points. [Highlights, Game Recap, Summary and more] [Soccer]

City dominated for much of the clash at the Etihad Stadium before breaking the deadlock on 70 minutes through a superb curled effort from De Bruyne on the edge of Chelsea’s 18-yard-box.

Saturday’s result means City, who have 56 points after 22 games in the Premier League, have now won their last 12 league matches, extending their lead over second-place Chelsea.

The two sides could not be separated in a quiet first half, but City midfielder Jack Grealish enjoyed a golden opportunity minutes before the break when Chelsea midfielder Mateo Kovacic lost the ball on the edge of his own box. The ball quickly found Grealish, but he missed the ensuing one-on-one with Chelsea goalkeeper Kepa Arrizabalaga.

Chelsea managed to put rare pressure on City’s goal after the restart as striker Romelu Lukaku was sent through on goal following a threaded ball from Kovacic, but the Belgian striker could not find a way past opposing goalkeeper Ederson.

Chelsea forward Christian Pulisic was substituted for Timo Werner on 69 minutes after a quiet performance as Tuchel looked for a winner.

However, De Bruyne proved to be the difference, receiving the ball in space from defender Joao Cancelo before curling a strike into the far-bottom corner.

City have now recorded 13 clean sheets in the Premier League this season, three more than the second-best Liverpool (10).