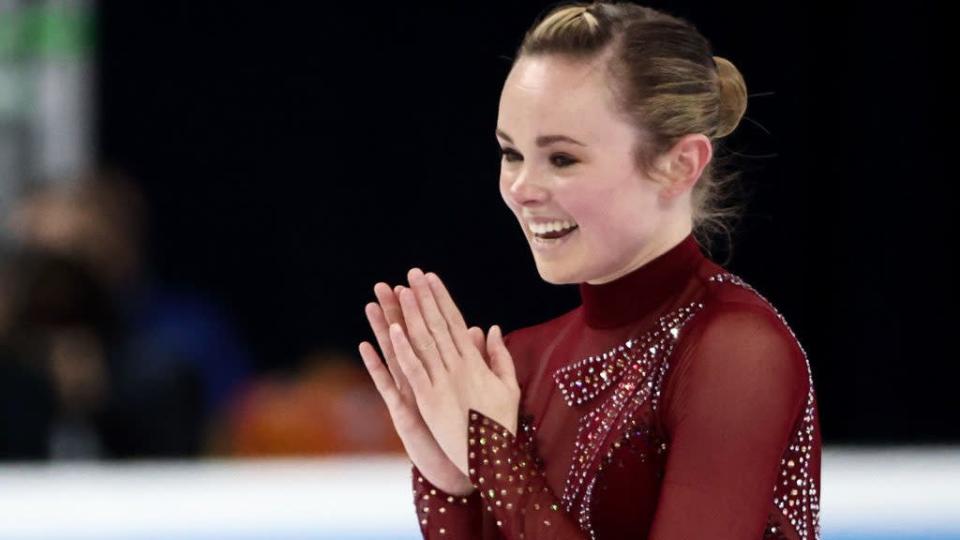 Bell, 25, captured her first national title in her ninth appearance, winning the last competition before the three-woman Olympic team is announced Saturday.

Bell, a previous U.S. silver and bronze medalist, had the top short program and free skate, tallying 216.25 points in Nashville. She’s almost certainly going to her first Olympics, and should be joined by Karen Chen, a 2018 Olympian who finished second, 2.4 behind.

The third spot may go to two-time national champion Alysa Liu, the top American in the world rankings.

Liu tested positive for the coronavirus and withdrew earlier Friday after a third-place short program Thursday. Liu was set to petition for a spot on the team, to be decided later Friday night by a selection committee looking at a year’s worth of results.

Isabeau Levito took bronze in her senior nationals debut. At 14, she’s too young for the Olympics. Gracie Gold, a 2014 Olympian on the comeback who was a surprisingly high sixth in the short, finished 10th overall.

Whoever the selection committee chooses, they go into the Olympics looking up at a three-woman Russian team that’s currently favored to sweep the medals.

She finished second in the 2012 U.S. Junior Championships at age 15, then had a best finish of sixth in three senior nationals appearance before changing coaches and moving from Colorado to California.

Bell blossomed under coach Rafael Arutunian and with training partners including Nathan Chen, Adam Rippon and Ashley Wagner. Her breakthrough was a runner-up at 2016 Skate America, two months after the coaching change.

“I’m starting to realize my own potential,” she said that day. “I’m very excited for the future.”

Bell entered the 2018 U.S. Championships ranked third among Americans hoping for a spot on the three-woman PyeongChang Olympic team. But she finished fifth at those nationals and was second alternate for those Winter Games.

At that age, most skaters who miss an Olympics hang up their skates. Bell endured and added the retired Rippon to her coaching team (similar to Bell, Rippon made his first Olympics in his ninth senior nationals).

Bell’s best finish in three world championships was ninth at her last appearance in 2019. She has since put out the best performances of her career. She earned silver at 2020 Nationals, with a stirring free skate, and gold at 2020 Skate America (normally an international event, but limited to almost all Americans due to the pandemic).

Bell ranks eighth in the world this season among skaters expected in the Olympic field.

“I hate it but I love it when people talk about age,” Bell said last year. “I would never use my age as any kind of an excuse. There’s no reason why me being 24 would make anything harder. I should be more in tune with my body and have a better understanding.”

Chen, after finishing 11th in PyeongChang, considered retiring while taking the next season off due to injury. She returned, balancing training and competition with Cornell classes until the pandemic. Now she’s focused on skating but plans to return to school later this year.

Chen’s cap feather: a pair of fourth-place finishes at world championships (2017 and 2021).

Bell and Chen entered nationals ranked second and third among senior U.S. women this season. Liu was ranked first — and fifth in the world when excluding extra Russians who won’t be at the Olympics — a big reason why her petition could be successful.

Liu, who in 2019 became the youngest U.S. senior champion in history at age 13, has landed triple Axels and quadruple jumps, but none cleanly in the last two seasons.

Amber Glenn, the No. 4 U.S. woman this fall, withdrew after a positive coronavirus test the morning after a rough 14th-place short program. Glenn said she competed while ill.

OlympicTalk is on Apple News. Favorite us!