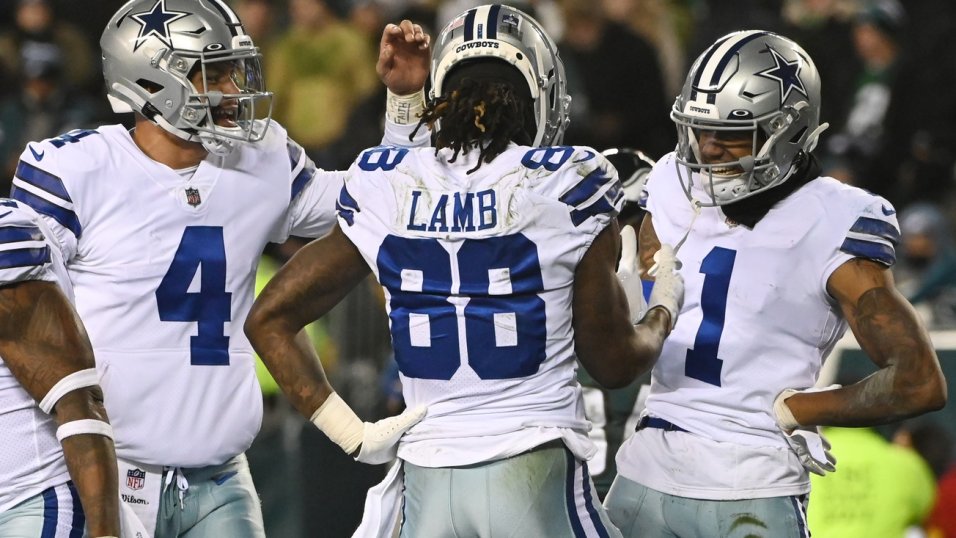 With a playoff berth secured, the Philadelphia Eagles played backups nearly across the board, and the final score reflects that.

Dak Prescott and the Dallas Cowboys cruised to a 51-26 win over Philly to improve to 11-5 on the season and stay alive in their chase for the No. 2 seed in the NFC playoffs. Dallas now needs the Arizona Cardinals, Tampa Bay Buccaneers and Los Angeles Rams to lose to earn the No. 2 seed.

Against a practice squad-level Eagles defense, Prescott rose to the occasion. He should finish PFF’s reviews process with multiple big-time throws, zero turnover-worthy plays and a 90.0-plus PFF grade. He was rarely pressured and took advantage of consistent separation from his receiving corps.
Running Back

Ezekiel Elliott and Corey Clement led the way for Dallas on the ground. Zeke rushed for 87 yards on 18 carries — four of which went for first downs. Clement was a bit more efficient on touches, as he totaled 58 yards on seven carries, including a 38-yarder.

Backups Jaquan Hardy and Ito Smith played only a few snaps late in the game, but both backs still found the end zone and combined for 30 yards on four carries.
Wide Receiver/Tight End

Cedrick Wilson was the star of the show for Dallas. Working mostly from the slot, Wilson hauled in five receptions for 119 yards and two touchdowns on the night. Amari Cooper finished second on the team in receiving with five receptions for 79 yards and zero drops. Tight end Dalton Schultz also found the end zone twice and finished the game with three receptions from three targets for 21 yards.

Wilson and tight end Blake Jarwin were the only two pass-catchers charted with drops on PFF’s first review of the broadcast film.

A combination of injuries and the blowout pushed Dallas to play eight different offensive linemen Saturday night. Guard Connor Williams led the group in snaps played (62) and should finish reviews with 70.0-plus overall and run-blocking grades. Dallas’ highest-graded offensive lineman from the game will likely be star guard Zack Martin, who currently leads all NFL guards in PFF grade this season.
Defensive Line

None of Dallas’ defensive linemen should finish reviews with a PFF grade above 80.0. Dorance Armstrong was among the most impressive of the group and should come out of this game with a team-high five total pressures.
Linebackers

Likely Defensive Rookie of the Year Micah Parsons didn’t suit up in this game, leaving a combination of Leighton Vander-Esch (65 snaps played), Keanu Neal (45) and Luke Gifford (16) to split up linebacker duties. Neal and Gifford both finished the game with multiple defensive stops while Vander-Esch only logged one and recorded a missed tackle.
Secondary

Rookie Kelvin Joseph was a top performer in this one. The 2021 second-rounder allowed just 42 yards in coverage on 42 coverage snaps and recorded four total defensive stops. He should finish reviews with the highest single-game PFF grade of his career.

Backup Gardner Minshew filled in for the resting Jalen Hurts and was relatively unspectacular. He finished PFF’s first review of the broadcast film with a sub-60.0 PFF grade and one turnover-worthy play (Joseph’s dropped interception). He went 4-of-8 for 72 yards on passes 10-plus yards downfield.
Running Back

Jason Huntley, a 2020 fifth-round pick out of New Mexico, played his first offensive snaps of the season on Saturday and totaled 51 yards from 13 carries, including an 18-yarder scamper and two total first-down rushes. Kenneth Gainwell was the only other Eagles back who had opportunities in this game. He totaled 16 touches, 87 yards and a score.
Wide Receiver/Tight End

Rookie wide receiver DeVonta Smith caught 3-of-4 targets for 41 yards all in the first quarter to secure the Eagles’ franchise rookie receiving yards record. He was sidelined for the rest of the game.

Philly’s leading receiver was Quez Watkins, who recorded five receptions, 84 total yards and a score. He and Watkins were the only two Eagles receivers who found the end zone on Saturday.

La’Raven Clark, Iosua Opeta and Jack Anderson were the only three Eagles offensive linemen who played every snap on Saturday. Clark and Opeta combined to allow eight pressures while Anderson was the only starter who allowed zero pressured.
Defensive Line

Rookie Milton Williams was a standout performer for the Philly defensive line. He should finish reviews with the highest PFF pass-rushing grade of any of the defensive linemen and at least three total pressures.
Linebackers

Patrick Johnson led the Eagles’ linebacker room in defensive snaps played (55) and should finish reviews with a 60.0-plus PFF grade. The same can’t be said for rookie JaCoby Stevens, as the former LSU standout recorded zero defensive stops in the run game and allowed a touchdown in coverage.
Secondary

Philadelphia’s backups in the secondary struggled significantly against Prescott and Co. Josiah Scott, a second-year fourth-rounder out of Michigan State, allowed a team-high 75 yards and a touchdown in coverage on PFF’s first review of the broadcast film. Andre Chachere and K’Von Wallace both allowed 40-plus yards in coverage and scores, as well.