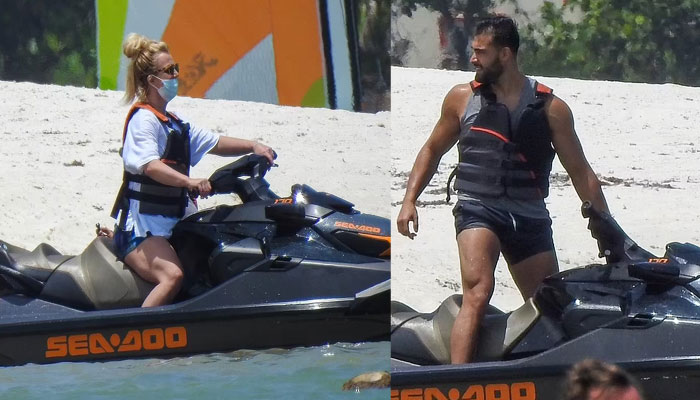 Britney Spears and Sam Asghari, who are expecting their first baby together, flew off to Mexico to enjoy a loved-up vacation.

The couple was spotted at Cabo San Lucas on Monday, May 9 where the 40-year-old singer hopped on a jet ski to ride the waves.

The lovebirds, who got engaged in September after going out for five years, were also joined by their close friends.

As per the pictures shared by Daily Mail, the Toxic singer sported an oversized tee and a pair of blue shorts.

Spears tied her blonde hair into a messy bun and wore pair of fashionable shades.

This came after the singer was widely criticised for her recent controversial photos on Instagram.

“Photo dump of the last time I was in Mexico BEFORE there was a baby inside me,’ she captioned her post while adding, “Why the heck do I look 10 years younger on vacation.”

Reacting to the singer posting the same image several times, fans took over the comment section to share their concern.

“If your man had respect for u he’d never let you post half the things you do! Leave some mystery…,” one comment read.

A fan expressed, “I really wished you would stop doing this. You keep proving that bit of an odd instability exists.”

Another wrote, “Starting to think those who were in control perhaps should have stayed in control..”