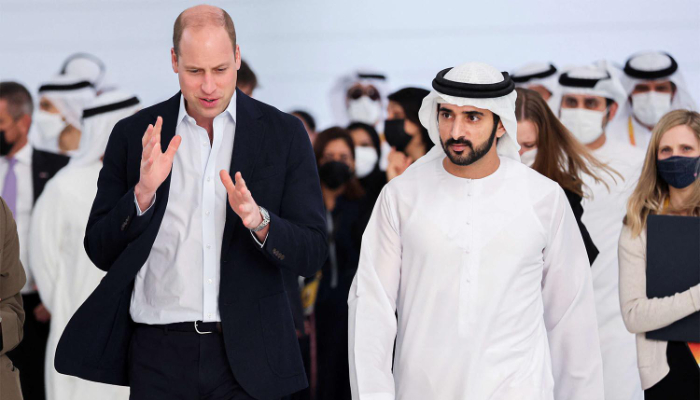 Prince William, second in line to the British throne, on Thursday visited the United Arab Emirates in what Kensington Palace said is the Duke of Cambridge’s first official visit to the UAE, reported Reuters.

The visit, at the request of Britain’s foreign office, comes as it seeks to deepen trade relations with wealthy Gulf Arab states as part of its post-Brexit strategy.

The Prince said on Twitter he was looking forward to using the trip to discuss achieving a more sustainable world.

The Duke of Cambridge’s visit coincides with the UK’s national day at Expo 2020, the world’s fair taking place in Dubai, reported The Associated Press.

Prince William will visit the UK pavilion and tour the $7 billion grounds of the Expo site, where he will discuss the importance of conservation efforts with young Emiratis, officials and conservationists.

Launched by Prince William and The Royal Foundation of the Duke and Duchess of Cambridge in late 2020, The Earthshot Prize held its first-ever award ceremony late last year, offering five, 1 million-pound prizes to innovators, entrepreneurs and scientists seeking solutions to the world’s greatest environmental problems.

The award is being funded for 10 years, totaling 50 prizes.

This year’s award ceremony will be held in the United States. Last year’s finalists will showcase their innovative solutions to an audience at Expo’s DP World pavilion following a speech by Prince William.

While the British monarchy has few practical powers and is expected to be non-partisan, it gives Britain a degree of “soft” power in global, diplomatic relations.

Prince Charles, William’s father and first in line to the throne, has visited the Gulf many times and developed strong links with the region.