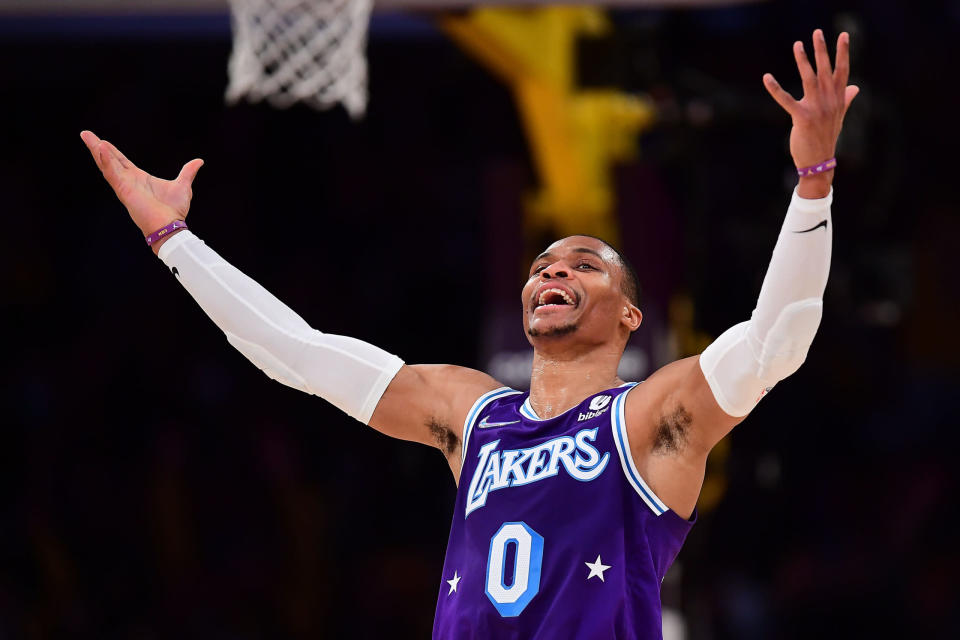 Time for another part of our ongoing Trade Rumor Rankings series, where HoopsHype takes the five players who have appeared most often on our Trade Rumors Page over the past week.

This week is headlined by the enigmatic Russell Westbrook, as well as by up-and-coming swingman Cam Reddish.

Two major reports on the Westbrook trade front came out this week.

First, The Athletic’s Sam Amick reported that the Los Angeles Lakers have expressed interest in trading the explosive but inefficient Westbrook:

All of which explains why sources say the Lakers showed some covert interest in discussing a possible Westbrook trade with rival executives earlier this season. A deal appears extremely unlikely before the Feb. 15 trade deadline, if only because his deal that was once seen by so many as untradeable is such a massive obstacle. But inside the Lakers, it seems, there is some recognition that this hasn’t gone as (James and Davis had) planned.

However, with the Lakers coming out victorious in their last four games and Westbrook posting an average plus-minus of +16.5 in that stretch, perhaps L.A. will think twice about shipping out the triple-double machine.

Because even if the Lakers do want to trade Westbrook, interest in the 33-year-old is reportedly not all that high, at least according to Dan Woike of the Los Angeles Times:

The Athletic’s Sam Amick reported this week that the Lakers have had internal discussions about possibly trading Russell Westbrook, but according to my sources around the NBA, the appetite for that player making $44 million this season and $47 million the next is very low.

Los Angeles might be better off making the Westbrook fit work out as well as they can this season before trying to move him in the offseason when at least he’ll be on an expiring contract.

For the latest on the Russell Westbrook trade front, click here.

Things have been quiet on the Bradley Beal trade front for weeks, and despite his name popping up on our Trade Rumors Page multiple times lately, the fact hasn’t changed.

Brian Windhorst: I have heard nothing on Bradley Beal in the trade market. His name hasn’t been mentioned at all.

…while Marc Stein stated that there is nothing indicating that Beal is trying to get himself moved to the Boston Celtics to team up with fellow St. Louis native, Jayson Tatum:

Marc Stein on Bradley Beal: I have never heard a credible, really plugged-in suggestion that says, ‘Yes, he’s trying to get to Boston.’ Now I think people certainly believe that because obviously he has the whole St. Louis friendship with with Tatum.

As it stands, don’t expect Beal to go anywhere before next month’s trade deadline.

For the latest on the Bradley Beal trade front, click here.

It was a busy week regarding a Ben Simmons trade, at least in the scuttle department, as we have received a lot of reports on the matter over the past seven days.

First, Amick reported that the Philadelphia 76ers are still asking for a whole lot for their All-NBA-level guard:

Still, sources say the Sixers – who have been on the lookout for an All-Star in return for Simmons for so long now – have continued to ask for a massive haul in return while frustrating some suitors along the way. As such, some team executives remain convinced that Sixers president of basketball operations Daryl Morey is still waiting for Portland’s Damian Lillard or Washington’s Bradley Beal to be made available down the line (i.e. this summer at the earliest).

Then, Stein shared that the Atlanta Hawks could be a suitor for the Australian floor general:

In that same report, Stein shared that the Sixers top priority isn’t to move Simmons, but to convince him to come back this season and suit up for Philadelphia, most likely to up his trade value ahead of the offseason, where Daryl Morey might try to swing a blockbuster deal involving the team’s point guard:

The 76ers will be discussing various Simmons trade scenarios for the next month, but actually trading him before the NBA’s annual trade buzzer is not their preferred scenario. As it stands. Convincing Simmons to rejoin the team and play as much of the remaining schedule as possible, according to one source familiar with Philadelphia’s thinking, is the club’s “goal No. 1” when it comes to the wayward playmaker.

For more on Simmons and a potential trade, just click the link below, but it still doesn’t seem we’re any closer to seeing the supersized point guard being moved over the next month.

For the latest on the Ben Simmons trade front, click here.

Despite Reddish posting the best season of his young career thus far, it still appears the Hawks might consider trading the former Duke standout. Why? So they don’t have to pay him a large sum of money on his upcoming rookie-scale extension.

Rather than lose him for nothing, Atlanta is reportedly considering trading him ahead of next month’s deadline.

That’s according to Amick, at least:

But there’s a fine line between roster depth and roster dilution, and sources say the Hawks – well aware that their rotations are a bit crowded when fully healthy – are on the lookout for a one-for-two type of deal for an impact player. Veteran forward Danilo Gallinari (just $5 million of his $21.4 million guaranteed on his deal for next season) and third-year small forward Cam Reddish, it seems, are the most likely candidates to be headed out.

As well as according to Windhorst:

Brian Windhorst: I just think there’s a belief out there that maybe they’re not right now committed to giving Cam Reddish the type of contract he’s looking for. And so he potentially could be on the move,

Reddish is still just 22 and averaging 12.3 points while shooting nearly 38.0 percent from beyond the arc. The potential is there for him to become a really steady, score-first swingman at some point.

For the latest on the Cam Reddish trade front, click here.

With the Portland Trail Blazers being forced to shut down Damian Lillard for another week due to his ongoing abdominal strain issues, the odds of him getting traded this season appear to be likewise dwindling (via Stein):

Numerous teams are watching Portland intently to see how the Trail Blazers handle Damian Lillard’s ongoing issues with an abdominal injury, since an extended absence or a potential surgery – avenues that the Blazers have resisted to this point – would certainly have a significant impact on their trade deadline approach.

Swinging a blockbuster trade is difficult enough, but when the superstar in question is hurt like Lillard is, it becomes nearly impossible.

Bleacher Report’s Jake Fischer did also report this week that the New York Knicks nearly went all-in on a Lillard trade last offseason, though that didn’t come to fruition:

A whiff of winning, in such a competitive business, naturally creates a hunger for more. A faction of the Knicks front office even lobbied for an aggressive pursuit of Damian Lillard this past offseason, league sources told B/R, just as Philadelphia and other suitors helicoptered his status in Portland.

Lillard getting traded this season remains extremely unlikely, though crazier things have happened in the NBA, so keep an eye on the link below as we get closer to the trade deadline.

For the latest on the Damian Lillard trade front, click here.