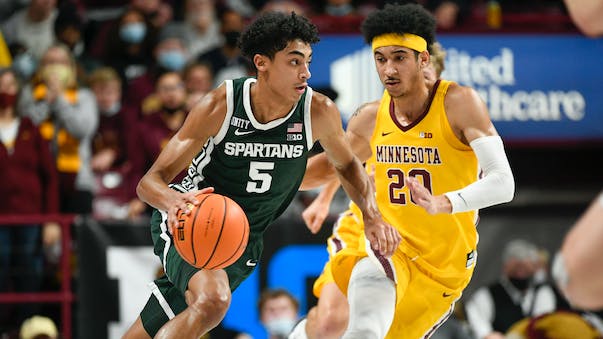 1. Michigan State (13-2, 4-0): Tell me when you’ve heard this before. Hall of Famer Tom Izzo’s teams get better as the season progresses. That’s definitely the case this season with eight straight wins.

2. Illinois (11-3, 4-0): The Illini are still without Andre Curbelo, but they’re riding 7-foot All-American Kofi Cockburn back into the mix for a national ranking coming off a COVID-19 pause.

3. Wisconsin (12-2, 3-1): The Badgers have arguably the early favorite for national player of the year honors with super sophomore Johnny Davis, who opened eyes with a 37-point game vs. Purdue.

4. Purdue (12-2, 1-2): The Boilermakers were the team to beat in the Big Ten, but they’ve fallen down to earth since being ranked No. 1 in the country, especially with losses to Rutgers and Wisconsin.

5. Ohio State (9-3, 3-1): The Buckeyes saw their five-game win streak since beating Duke end in humbling fashion Thursday with a 17-point loss at Indiana.

6. Indiana (11-3, 2-2): Hoosiers coach Mike Woodson with star Trayce Jackson-Davis have a Big Ten title sleeper their team can win on the road after starting the season 11-0 at Assembly Hall.

7. Gophers (10-2, 1-2): The Gophers have impressive road wins at Mississippi State and Michigan under first-year coach Ben Johnson, but the latter victory against the Wolverines is losing luster.

8. Rutgers (8-5, 2-1): Remember the Scarlet Knights from last season? They didn’t really show up until the dynamic duo of Geo Baker and Ron Harper Jr. led them to wins over Purdue and Michigan.

9. Iowa (11-4, 1-3): No Big Ten player other than Wisconsin’s Davis has made a bigger improvement from last season than Hawkeye sophomore Keegan Murray, the NCAA’s top scorer.

11. Michigan (7-6, 1-2): Juwan Howard earned a new contract from last year’s Big Ten title, but the Wolverines look far from the group that reached the Elite Eight after losing three of their last four games.

12. Northwestern (8-4, 1-2): The Wildcats have more talent in Chris Collins’ ninth season, but they’re losing too many close games to take the next step into the middle of the Big Ten.

13. Maryland (8-6, 0-3): The Terrapins are the league’s biggest disappointment so far, but there was a reason the university decided to part ways mutually with coach Mark Turgeon.

14. Nebraska (6-9, 0-4): Cornhuskers coach Fred Hoiberg knows his team is better than its record, but he’ll have to pull off some upsets soon to prove the doubters wrong.