Star Trek: Discovery season 4, episode 8 review: “Returning with a whimper, not a bang” 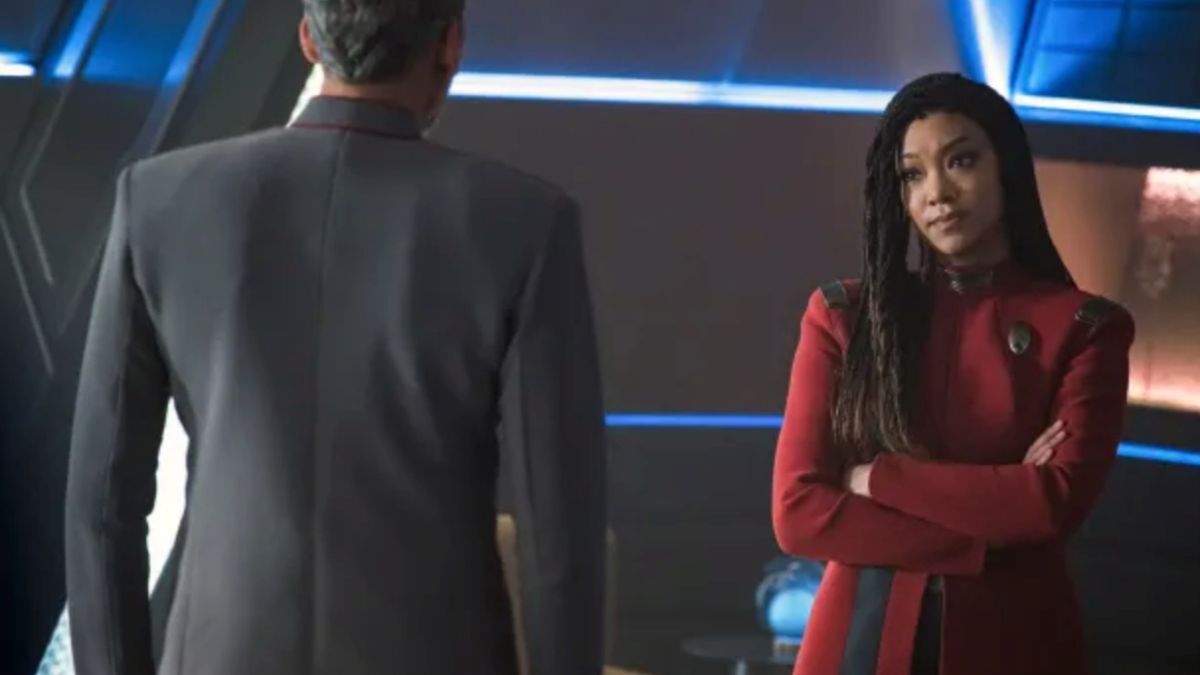 Warning: This Star Trek: Discovery season 4, episode 8 review contains major spoilers – many of them set to stun. Boldly go further at your own risk…

Star Trek: Discovery returns from its mid-season break and it’s very much business as usual for Burnham and the crew. Unfortunately, in a season as up-and-down as this one, that means the promise of episode 7’s cliffhanger collapses quicker than an unstable warp bubble.

“All In” picks up where its predecessor left off, as Starfleet mobilizes to track down Book, Ruon Tarka, and the prototype spore drive they’ve stolen to enable their illegal quest to destroy the Dark Matter Anomaly. To say the Federation President is angry would be something of an understatement – beyond the obvious risk of provoking Species 10C, she thinks the heist is a potential PR disaster – but she also believes Burnham’s relationship with Book makes her unsuitable for the clean-up operation. It turns out, however, that Burnham’s penchant for insubordination is infectious, and before long Fleet Admiral Vance is quietly encouraging her to stretch the parameters of her data-gathering mission.

Burnham’s prime directive is beating Book and Tarka to a supply of isolynium, the dangerous substance they need to make their treaty-smashing weapon of mass destruction operable. And as they venture into a world of black-market profiteers operating outside Federation jurisdiction, the episode has all the ingredients to be an Indiana Jones-style ‘find the McGuffin’ adventure. Alas, there’s a major flaw in the execution – if Raiders of the Lost Ark had been this flat, Dr. Jones would never have been allowed to leave his college campus again.

Star Trek has always had an uneasy relationship with the sort of wretched hives of scum and villainy that have been integral to Star Wars since day one. When Burnham and Lt Cmdr Owosekun (clearly relishing the rare opportunity to get off the bridge) jet down to the Karma Barge casino, it’s hard to work out what’s more implausible. Is it the sanitized production design lifted right out of a modern-day nightclub? Or is it the ease with which the ever-adaptable Burnham moves through a lawless world? Even after the year she spent with Book before Discovery caught up with her in 32nd century, it’s hard to buy that a Starfleet lifer who spent her formative years on Vulcan would blend in so effortlessly.

It’s no surprise, of course, that they’ve found their way to the same den of iniquity as Book and Tarka, a place strangely devoid of intrigue or danger. The establishment’s grinning proprietor (played by Daniel Kash, whose role as one of the marines in Aliens guarantees sci-fi immortality) is the kind of guy who’ll play all sides to come out with a profit, yet seems unlikely to intimidate anybody. Instead, as he artificially inflates the price of the isolynium, the two factions are forced into strangely mundane money-making ventures – Book and Tarka go looking for a changeling gambling cheat, while Owo becomes an unlikely prizefighter, with Burnham as her promoter. After season 3’s revelation that Owo can hold her breath for 10 minutes, she’s making a case for heading up Disco’s team at the 3188 Olympics.

But the episode’s biggest flaw is the card game that should be its center point. With a pair of former Emerald Chain criminals buying in, and the fate of the universe in the balance, this is a genuinely high stakes contest. But where Casino Royale bolstered its tabletop set-piece with an epic staircase scrap and a near-fatal poisoning, this is – well – just a card game. And not a particularly convincing one, either, as Burnham’s over-the-top banter with Book makes it blatantly obvious she’s up to something. Bizarrely the whole charade is no more gripping than one of the regular poker nights on the USS Enterprise-D.

By the time Book walks away with the isolynium, the situation is more-or-less the same as when the episode began. Yes, Book and Tarka have the illicit substance they need to make their bomb tick, and Burnham has discovered a cunning way to track Starfleet’s Most Wanted. But, seeing as we’ve only just learned they needed the isolynium anyway, the episode feels like momentum-sapping padding.

And if the writers wanted to get Book and Burnham in the same room for a heart-to-heart, surely they could have found a more inventive, less soap opera way to do it. Indeed, with Tarka now punctuating his rampant egotism with fortune cookie wisdom – “Sacrifice is always heavy” – and Dr Culber’s efforts to manage the entire crew’s mental health still weighing heavy, the needs of the melodrama seem to outweigh the needs of dealing with the anomaly.

It’s kind of fitting that the episode should end with another of this season’s clichés, in the form of a huge revelation in a talky final scene. If the DMA is indeed a dredge on a mission to extract boronite for Species 10C, it’s a wonderfully unglamorous twist on an unfathomable threat – rather like the Vogons destroying Earth to make way for a hyperspace bypass in The Hitchhiker’s Guide To The Galaxy.

That said, the implication that Species 10C have even more powerful weapons ups the threat level significantly, with the President’s assertion that “Booker and Tarka must be stopped – whatever the cost,” feeling like a genuine statement of intent.

New episodes of Star Trek: Discovery season 4 beam onto Paramount Plus on Thursdays in the US and Crave in Canada. UK viewers can watch episodes on Pluto TV.