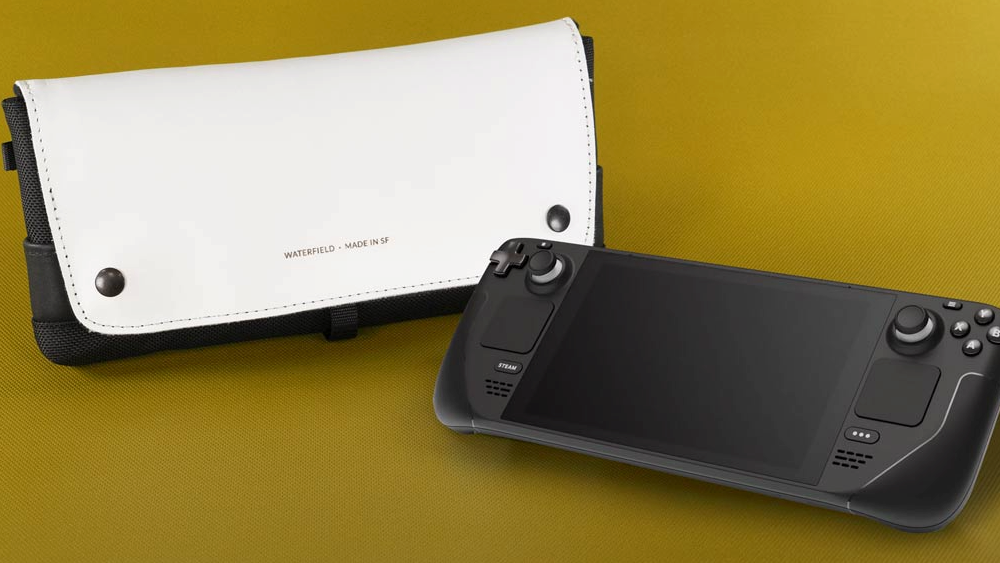 All Steam Deck models come with a carrying case, but if you’re looking for something a tad fancier, Waterfield Designs is releasing a new edition of its

CitySlicker case designed specifically for the Steam Deck.
This premium carrying pouch is made of full-grain leather and ballistic nylon, so your Steam Deck will be both safe and stylish. The CitySlicker will be available to order starting February 18.

It comes in eight different color options, including white, black, blue, and crimson. If you’d prefer a more natural leather look, you can get Grizzly or Chocolate Leather with or without waxed canvas (which gives it a rugged look). The case has three different optional add-ons: a sling strap, leather wrist loop, and carabiner.

In addition to the plush main compartment, it has a zippered back pocket for accessories such as USB-C and HDMI cables, earbuds, portable battery packs, etc. It also has dedicated slots for SD cards.

CitySlicker cases for each Nintendo Switch model.
The San Francisco-based company is known for its high-end gear for game consoles, laptops, audio equipment, and more. It recently released

multiple different Analogue Pocket cases,
and a limited run of the sold-out

PS Vita CitySlicker
available to order until February 14 (if you happen to still be playing Vita).

Considering the premium materials used to craft these cases, it’s no surprise that they are some of the pricier carrying cases out there. While the Steam Deck’s case price hasn’t been revealed, the CitySlicker for Nintendo Switch starts at about $90. Even so, Waterfield Designs’ cases tend to sell out quickly when they go up for order. You can get early access to the CitySlicker Steam Deck case–starting at 6 PM PT / 9 PM PT on February 17–by

As for the Steam Deck itself, if you managed to secure an early reservation, Valve will start sending emails on February 25 to complete your order. The first batch of Steam Decks are expected to arrive by the end of the month. For more on portable gaming PC, check out our roundup of everything we know about the Steam Deck.