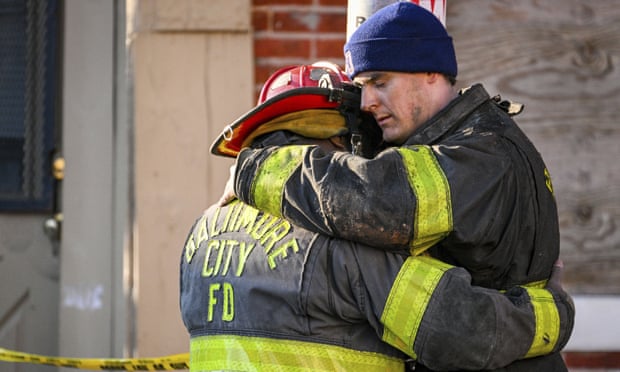 City’s fire chief says a fourth firefighter was also injured, when part of a vacant home collapsed amid fire.

Three Baltimore firefighters were killed and a fourth injured when part of a vacant home collapsed while they were battling a blaze early on Monday, the city’s fire chief said.

Chief Niles R Ford told a news conference that injured firefighter John McMaster was pulled from the rowhome immediately and taken to the hospital, where he was listed in critical condition Monday afternoon. Dr Thomas Scalea of Maryland Shock Trauma said McMaster was on life support.

“Fingers crossed that he’s going to make it and be just fine,” Scalea said. “It’s hard to know at this point.”

Scalea said Sadler and Lacayo suffered cardiac arrest at the scene and couldn’t be resuscitated.

“Today, Baltimore has lost three of the bravest among us,” said Baltimore mayor Brandon Scott. “Baltimore owes them the deepest gratitude and respect that we can offer anybody.”

Photographs from the scene showed firefighters being consoled by their comrades. Later, an excavator cleared the remaining debris, leaving a gap between two rowhouses.

Three firefighters were injured battling a blaze at the same location in 2015, the Baltimore Sun reported.