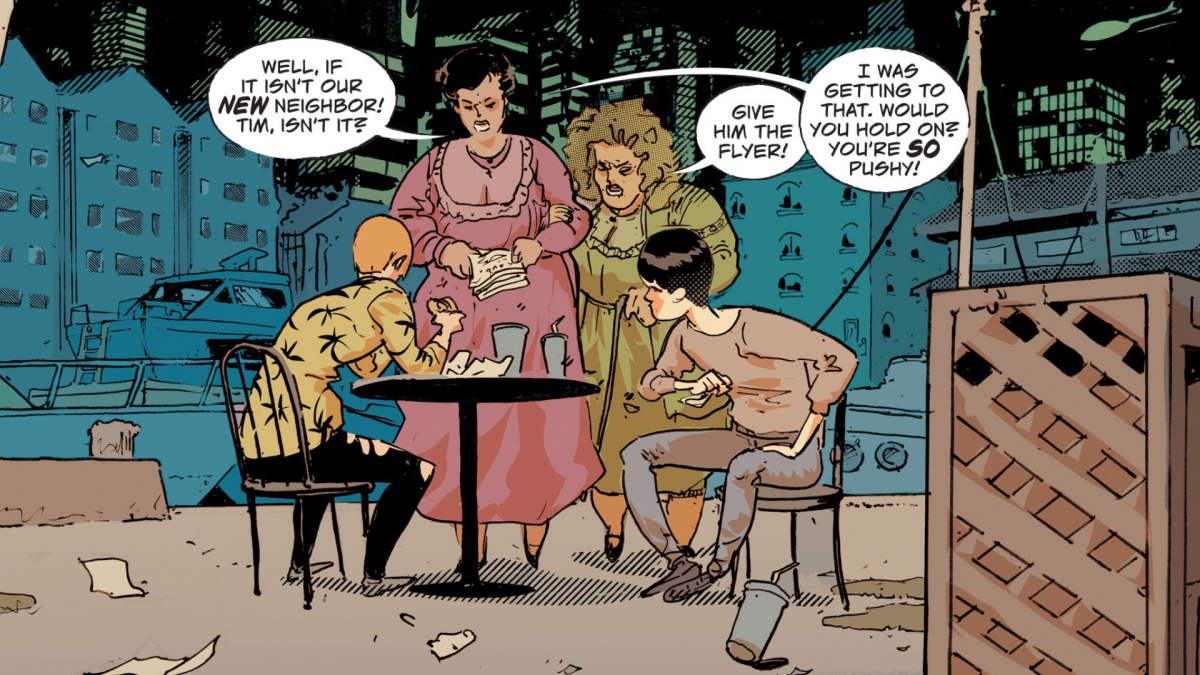 Tim Drake: Robin #1 takes the titular hero on a brand new adventure: living independently of the Bat family, in a houseboat he chose himself.

Written by Meghan Fitzmartin, drawn by Riley Rossmo, colored by Lee Loughridge, and lettered by Tom Napolitano, Tim Drake: Robin continues the story begun by Fitzmartin in Batman Urban Legends last year, as he attempts to solve a mystery over a year in the making.

In a new preview released by DC, Tim goes on a date with his boyfriend (although they haven’t officially labeled things) of six months, Bernard, and the two have a brief interaction with some of Tim’s new neighbors. They’re a mother-daughter duo referred to as Mère and Cam, respectively, and they approach Tim and Bernard at their dinner table in the Marina near Tim’s new digs with flyers for a fundraiser.

Tim uses this opportunity to introduce the other colorful characters of the Gotham City Marina, and Bernard remarks that he’s never seen Tim look so happy.

Check out the preview pages below.

Overall, the Tim Drake: Robin #1 preview shows a sweet series of moments, though it seems unlikely the story will continue to trend that way. In the official description of the title from DC, the publisher teases a mysterious villain who’s been watching Robin from afar, and everyone he loves is in danger.

If Tim wants to continue having nice dates with Bernard, he’ll have to figure out who’s hunting him ASAP.

This is how Tim Drake became more than just a Robin for the Batman family.