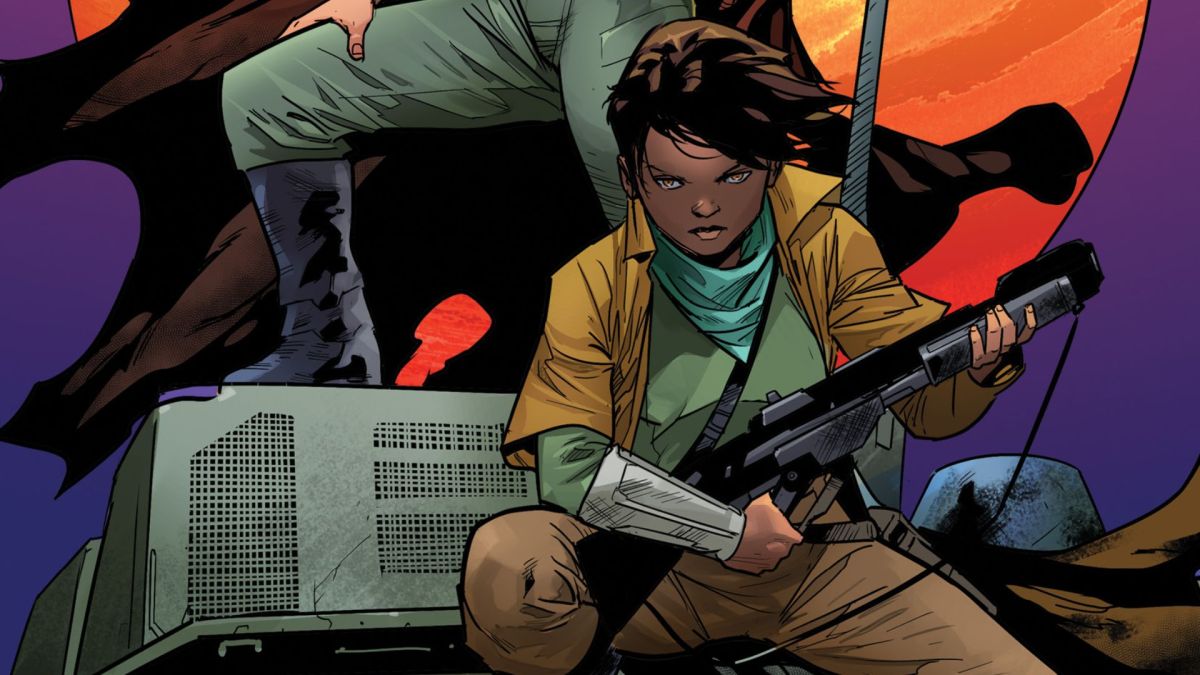 Marvel Comics continues to provide new details on its plans to celebrate the LGBTQI+ community.

The Marvel’s Voices: Pride anthology will return in June for a second annual edition showcasing Marvel LGBTQI+ characters and creators, plus the publisher will offer a variety of Pride variant covers for both its Marvel Universe titles and its Star Wars line, like this Pride variant cover for June 15’s Star Wars: Bounty Hunters #24 by artist Jan Bazaldua featuring T’onga and Losha from the Bounty Hunters series.

This will be the second year the Star Wars Universe will celebrate Pride week with Marvel. The remaining six (of seven) Star Wars Pride variant covers will feature artwork by Kei Zama, Paulina Ganucheau, Javier Garron, Derek Charm, Phil Jimenez, and JJ Kirby featuring the Star Wars Universe’s LGBTQI+ characters and will be revealed next week.

According to the publisher, Marvel’s Voices: Pride 2022 anthology will give creators and readers an opportunity to “explore and celebrate the wide range of identities and experiences of the LGBTQI+ community with uplifting and exciting adventures all set in the main Marvel Universe!”

This year author Charlie Jane Anders will introduce Escapade, a new trans mutant superhero to the Marvel Universe, who like Somnus will be seen again.

Other stories include a story about Moondragon’s complex history for a “heart-bending story across space and time” by writer Christopher Cantwell.

That story is illustrated by Scott B. Henderson in his first work for Marvel.

Writer Danny Lore revisits the legacy of “two characters long left in the closet in a tale of love and redemption,” and television writer and podcaster Ira Madison III explores “the legacy of Pride” in his Marvel debut.

Creator Amy Reeder illustrated a Loki variant cover for the special, featuring “variant Lokis” appropriately enough, leaning heavily into the Disney Plus Loki streaming series. In addition to Loki, the cover features Lady Loki, Kid Loki, a “classic Loki,” Alligator Loki, and a Loki wearing what looks to be some sort of uniform that brings to mind Loki while acting as an agent of the TVA.

Here’s a look at that Reeder cover and other Marvel’s Voices: Pride variant covers:

In addition, the Marvel’s Voices Pride trade paperback goes on sale in May collecting last year’s anthology as well as “powerful moments from throughout Marvel Comics history” such as Northstar’s wedding and the debut of Aaron Fischer in the United States of Captain America series.

Plus Marvel revealed its 2022 Pride Month variant cover program, which includes a total of eight covers by artists Luciano Vecchio and Betsy Cola.

Here’s the line-up of covers followed by a gallery:

Northstar and the Young Avengers Hulkling and Wiccan are on Newsarama’s list of the most iconic LGBTQIA+ superheroes of all time.