What to Watch in Sunday’s N.F.L. Playoff Games 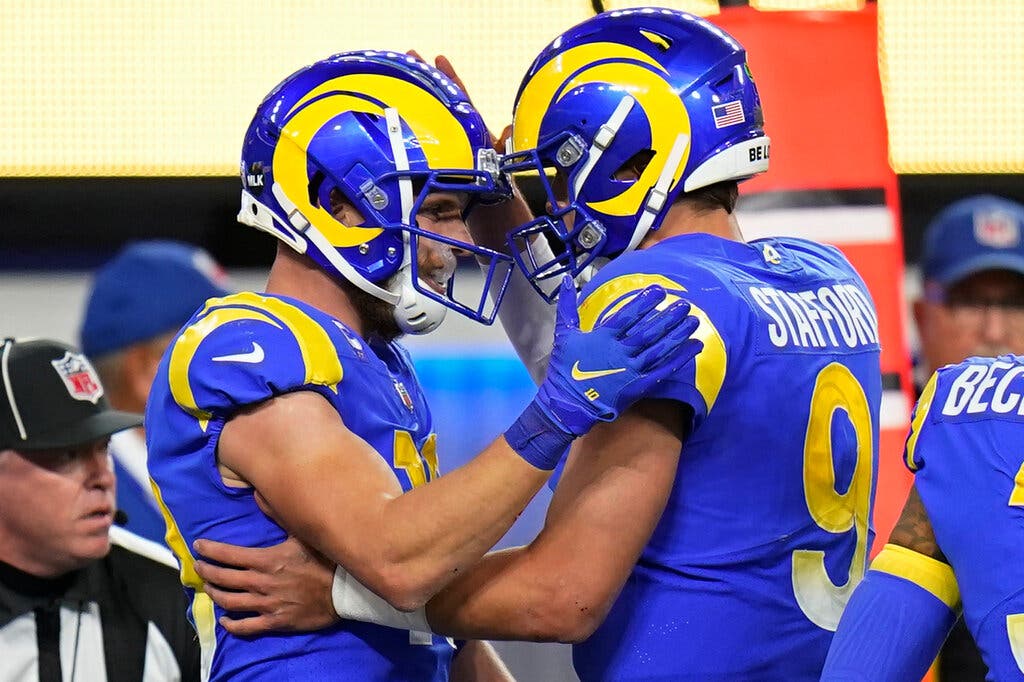 The Los Angeles Rams take on the Tampa Bay Buccaneers, and the Buffalo Bills face the Kansas City Chiefs.

The teams, all winners of their respective divisions, feature four quarterbacks who were among the highest rated during the regular season, on offenses that are accustomed to scoring plenty of points.

In the first game, the star-studded Rams and their dominant pass rush will face Tom Brady and the defending champions in Tampa. In the later game, a rematch of last season’s A.F.C. championship game between Kansas City and Buffalo, Patrick Mahomes will face a Bills defense that finished as the statistically best unit in the N.F.L. during the regular season.

All times are Eastern.

This is a rematch of a Week 3 meeting that Los Angeles won, 34-24. But the Buccaneers and the Rams barely resemble the teams that suited up nearly four months ago.

Los Angeles has since added the Pro Bowl edge rusher Von Miller, and he and defensive lineman Aaron Donald have been a fearsome pair. Safety Eric Weddle recently came out of retirement to join Los Angeles on its playoff run, and in November, the Rams added Odell Beckham Jr. to an already devastatingly productive receiving room alongside Cooper Kupp.

The Rams were one of the most dynamic teams in the first half of the season, as Matthew Stafford, the 13-year veteran whom Los Angeles plucked from Detroit, guided them to a 7-1 record. Stafford and the Rams faced a handful of hiccups down the stretch, however, as Stafford’s poor decisions forced throws into coverage. He threw 13 interceptions in the last nine games of the regular season.

Still, Los Angeles clinched the N.F.C.’s No. 3 seed and cruised past Arizona in the first round of the playoffs. Sony Michel and his fellow running back Cam Akers, who is coming off an Achilles’ injury, combined for 113 yards. Stafford threw the ball only 17 times.

The No. 2-seeded Buccaneers dispatched the Eagles just as easily last week behind their backup running backs, Ke’Shawn Vaughn and Giovani Bernard, and receiver Mike Evans, who caught nine passes, including one for a touchdown, for 117 yards.

Tampa Bay didn’t have defensive back Sean-Murphy Bunting, and it lost Jamel Dean early in the teams’ Week 3 matchup. On Sunday, the Buccaneers won’t have receiver Chris Godwin, who caught six passes for 74 yards in that same game.

With so many offensive weapons already missing, Tampa Bay’s offensive success against the Rams’ pass rush could hinge on the availability of two of its starting offensive linemen: right tackle Tristan Wirfs and center Ryan Jensen, both of whom sustained injuries against the Eagles last week. Their status is expected to be a game-time decision, according to Coach Bruce Arians.
Editors’ Picks
Brian Cox Takes Stock of His Eventful Life on Stage and Screen
‘The Gilded Age’ Finally Arrives on HBO
On ‘S.N.L.,’ Donald Trump Tries His Hand at Wordle

The Rams will face a Buccaneers defense that loves to blitz, but choosing when and how often to blitz Stafford will be key. Stafford led the league with a 139.6 passer rating when defenses sent extra rushers this season, according to N.F.L.’s Next Gen Stats.

The A.F.C. was once dominated by Tom Brady and Peyton Manning. Now, Patrick Mahomes and Josh Allen could become the conference’s marquee rivalry.

The bright young quarterbacks for Kansas City and Buffalo will lead their teams to their third meeting in less than a calendar year. They easily dispatched their wild-card opponents last week, and the winner of this divisional-round matchup will be two wins away from a Super Bowl title.

The defense should be better equipped this time, though, as Chris Jones, the team’s best defensive lineman, will play after being inactive Week 5 with a wrist injury. Kansas City also added the edge rusher Melvin Ingram during the season.

The Chiefs started the season 3-4 — with the Bills game in that stretch — because Mahomes was making uncharacteristic turnovers, the high-powered offense was failing to adapt to new strategies to contain those errors, and the defense was surrendering about 400 yards per game. But questionable losses by the A.F.C.’s best teams — add Buffalo’s loss to Jacksonville in that category — kept the standings close, allowing Kansas City to regroup and claim the No. 2 seed after experiencing only one loss since November. The defense permitted about 100 yards less per game, and Mahomes became more patient, taking underneath throws instead of forcing downfield shots. His ball security also improved: Through the first seven games, he threw nine interceptions; he has thrown five since.

The Bills, the No. 3 seed, remained steady for the majority of the season. Their reckoning, though, came in Weeks 13 and 14, when they had back-to-back losses to the Patriots and the Buccaneers. New England attempted only three passes in frigid weather, rushing for 222 yards and identifying holes in the Bills’ run defense. The 33-27 overtime shootout loss to Tampa Bay showed how pass-happy the Bills were and how much they leaned on Allen as a runner.

Since then, the Bills defense has allowed only 106.6 rushing yards per game, and the running backs became more involved — most notably Devin Singletary, who has averaged about 81 yards per game. The Bills’ defense finished as the top-ranked unit in the league, allowing the fewest points (289) and the fewest yards (4,637).

The team will be without the Pro Bowl cornerback Tre’Davious White, who tore his anterior cruciate ligament in the game against the New Orleans Saints on Thanksgiving. But safeties Micah Hyde and Jordan Poyer, two of the best in the N.F.L., will be lurking in the secondary, making Mahomes think twice about launching deep passes.