Who should be hired as the next head coach? 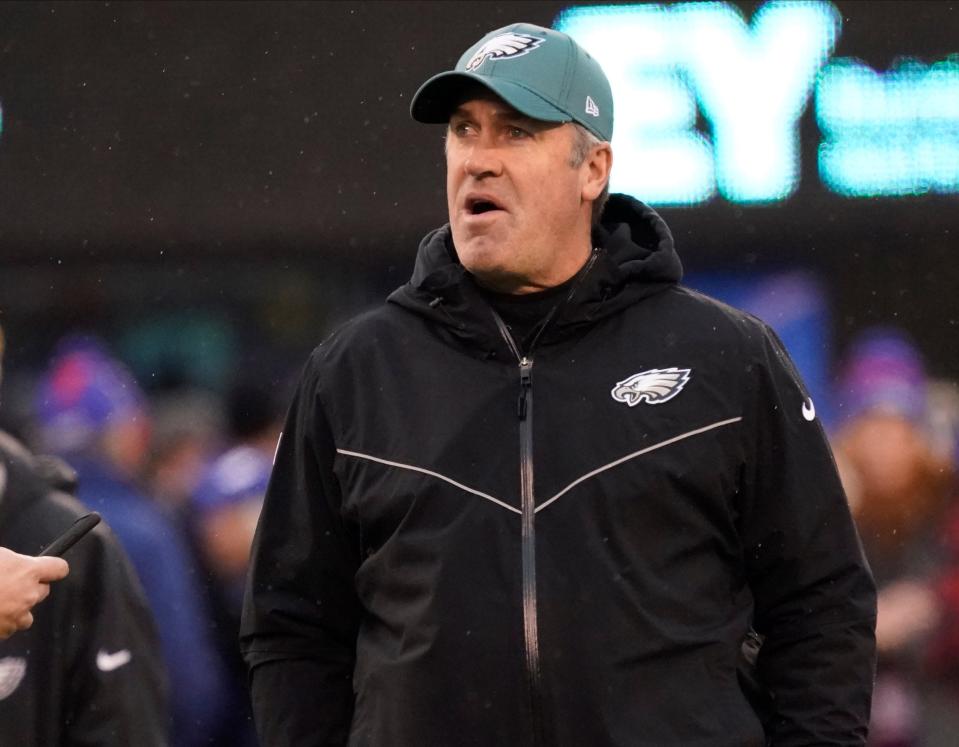 The Jaguars will be going into the third week of their search on Monday and they have already interviewed a broad range of candidates, including former Eagles coach Doug Pederson, former Colts and Lions coach Jim Caldwell and Bucs defensive coordinator Todd Bowles.

But the Jaguars have given no indication who is among the frontrunners or when will there search be completed.

Florida Times-Union staff writers John Reid and Garry Smits and sports columnist Gene Frenette conducted a roundtable discussion on whom the Jaguars should hire as the next head coach.

What to Know: About former Colts and Lions coach Jim Caldwell

Not a laughing matter?: Jaguars sponsor sues to have name pulled from Sunday’s ‘clown game’ finale

Who should the Jaguars hire as their next head coach?

Leftwich has connections around the NFL to hire a strong staff, which is needed. Pederson would be a good fit because he was a successful head coach in Philadelphia, leading the franchise to a 42-37-1 record over five seasons in Philadelphia, including winning Super Bowl LII. The Jaguars franchise is in need of a complete overhaul, and it would be ideal to have an experienced head coach that knows the formula to turn a franchise into a success.

Gene Frenette: It’s hard to say definitively who they should hire because there’s no home-run pick, not unless the Seattle Seahawks’ Pete Carroll or the New Orleans Saints’ Sean Payton decides to leave their long-time employers for the challenge of reviving the Jaguars. And you wonder, at 70, how much longer Carroll wants to keep going. Otherwise, there are a couple former NFL head coaches in Jim Caldwell and Doug Pederson that would be better equipped to bring stability and true leadership to a franchise desperate needing both elements. A lot could depend on what happens with GM Trent Baalke. If he stays, and I question why owner Shad Khan would want to keep him at this point, then Caldwell strikes me as the best candidate to have the better working relationship with him. If Baalke is gone and there’s a new organizational structure, either with someone overseeing football operations or the GM having final say on personnel matters, then another candidate like Green Bay Packers offensive coordinator Nathaniel Hackett could be a fit. I still would like to see the Jaguars interview Buffalo Bills OC Brian Daboll.

Garry Smits: My personal favorites are Jim Caldwell or Doug Pederson, but an ideal combination would be both: Caldwell over football operations and Pederson as the coach, with the two of them agreeing on a general manager. That was the model owner Shad Khan had in mind when he hired former coach Tom Coughlin in 2017, but in the end, Coughlin couldn’t leave the coaching to Doug Marrone, alienating players when he found out the coach-player dynamic was much different than in 2015, his last year as the Giants coach, and he pushed for questionable draft picks. Caldwell will bring the best of Coughlin’s knowledge of the pro game and more of a calming influence over a broken franchise with a jittery fan base.

Why did so much go wrong this season?

Reid: Urban Meyer was not ready to make the jump to the NFL. He turned out to be the franchise’s biggest distraction, and that was a problem. On the field, the Jaguars’ talent just wasn’t up to par with the majority of teams on their schedule. They lacked speed at wide receivers, the offensive line had too many protection breakdowns, and the defense made strides earlier in the season but struggled to stop the run during the final stretch. Rookie quarterback Trevor Lawrence was thrust into a tough situation and just didn’t have enough talent around him. He also struggled with his reads and forced enough throws for 17 interceptions with just 10 touchdowns.

Frenette: Geez, where do you even start? The biggest thing without question was hiring Urban Meyer. He was a square peg in a round hole in the NFL, and no matter how many times people forewarned Khan that his transition from college to NFL could be an issue, the Jaguars’ owner was too infatuated with Urban to not hire him. That’s why I wrote on the day Meyer started that he was a “boon-or-bust hire” because I couldn’t get past the thought of him being a monumental risk. But I doubt anyone thought he would flame out in such quick, disbelieving fashion. Anything about the 2021 season going haywire has to be traced back to hiring Meyer. There would have been far less dysfunction and acrimony in the building, and likely no James Robinson fiasco, had the Jaguars hired anybody else. Now the suspect roster and injuries, especially to D.J. Chark, Travis Etienne and Jamal Agnew, were also contributing factors that can’t be ignored. The Jaguars don’t have enough ammunition to help Trevor Lawrence reach anywhere close to his potential right now. Play-calling wasn’t great by any means, but that’s often too convenient a target for which to assign blame, though the Jaguars did throw the ball too much. The NFL is all about maximizing the talent you have, and the Jaguars simply couldn’t get there as long as Meyer was the head coach.

Smits: The main thing is that Urban Meyer didn’t adapt to the pro game. It’s not the first time an NFL owner has gone the college route but until you get a guy in the building, you don’t know if he’s going to be Jimmy Johnson or Pete Carroll, or Lou Holtz or Bobby Petrino. Meyer and general manager Trent Baalke then came up with a draft that hit only on quarterback Trevor Lawrence and cornerback Tyson Campbell and missed on the back end with too many projects who couldn’t contribute nearly enough, such as Walker Little, Luke Farrell, Jordan Smith, Jay Tufele and Jalen Camp — although Little and safety Andre Cisco have proven they perhaps should have played earlier. That came on the heels of the disastrous 2020 draft which has produced only two reliable starters, Laviska Shenault and DaVon Hamilton, with the rest either gone or serving mostly on special teams that aren’t so special.

What is your forecast for the franchise over the next two seasons?

Reid: This is going to take a complete rebuilding overhaul because the Jaguars lack talent and quality depth at just about every position other than quarterback. They have to draft correctly, make a splash in free agency to improve their offensive line and skill positions. The Jaguars should be able to win more than two games next season, but this is going to be a three-year rebuild for the Jaguars.

Frenette: A lot can change in one year, let alone two seasons, if the Jaguars can get the right power structure in there. Lawrence is going to be a good NFL quarterback, maybe great, once this organization manages to get a head coach and GM who institute the right culture that can have sustained success. That’s going to take acquiring a healthy amount of draft picks and free agents who live up to the value invested in them, something the Jaguars have been atrocious at for over a decade. There have been some good value acquisitions like a Dawuane Smoot, a Calais Campbell, a Brandon Linder (at least until injuries began piling up), but too many high-priced free agents and high draft picks performed below their investment price. No matter who the next coach is, the Jaguars can’t truly ascend until that part of the equation dramatically improves. Whether the Jaguars trend up or down the next two years will depend on them having a productive offseason and seeing recently drafted players like Lawrence, Etienne, Tyson Campbell, Walker Little, Laviska Shenault, K’Lavon Chaisson and Ben Bartch taking big steps in their development.

Smits: Depends on what Khan does. If he retains Baalke and then hires someone like Bill O’Brien or Todd Bowles to coach, I’m not optimistic. Khan has never truly cleaned house, always leaving someone from the previous failed regime. But if they start fresh and get the right people (again, Caldwell, Pederson, Scott Pioli, Byron Leftwich … you know the names) there are enough young players on this team to mix with a couple of really decent drafts, with enough cap money to work the free-agent market to turn this thing around. Contrary to what people such as Michael Lombardi said, culture can be changed very quickly when the right people are in the front office and on the sideline. The Jaguars have been losing for the better part of two decades. But that doesn’t mean it has to continue.

This article originally appeared on Florida Times-Union: Roundtable: Who should be hired as the next Jacksonville Jaguars head coach?