With Bison dominating and other top teams leaving, what’s the future of FCS football for USD, SDSU? 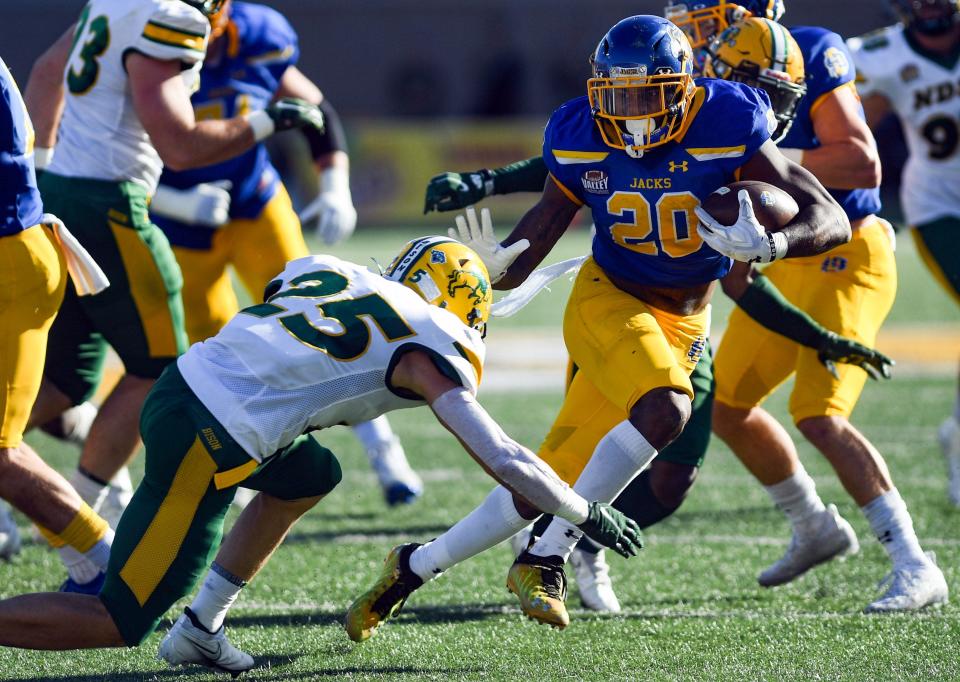 Two of the heavyweights of FCS football have played their last game at the level, as James Madison and Sam Houston, two teams familiar to South Dakota State fans for handing their Jackrabbits devastating playoff losses, are taking their programs to the FBS (formerly I-A) level starting next year. So is Jacksonville State, another regular in the FCS playoffs.

It’s the continuation of a trend. Georgia Southern, Appalachian State, Coastal Carolina, Liberty and Old Dominion are among other FCS contenders who have made the jump. JMU and Sam Houston are the only programs to win a national championship other than North Dakota State going back to 2011. Georgia Southern won six FCS national titles before leaving; App State won three.

These defections have only amplified the voices up north for North Dakota State to look harder at making the move up to FBS as well. And why not? The Bison’s dominance has reached almost absurd levels. There’s clearly nothing left to prove, and as attendance at the Fargodome dwindles, it’s becoming obvious that their own fan base is almost as bored with the winning as the fans of their foes.

A question that once was, “Who is going to step up and take down the Bison?” is slowly morphing into, “What are the Bison still doing at the FCS level?” Maybe it really is time for them to go.

What would that mean for the FCS? What would it mean for South Dakota and South Dakota State? Because it’s not just about NDSU. In the short term, saying goodbye to NDSU might provide a brief respite. Presumably, SDSU would finally win its first national title without the Bison (and JMU, Sam Houston and others) in their way.

Quality gap in FCS growing by the season

Even without NDSU in the picture, the FCS feels like it’s being pulled in two separate directions. The teams at the top are better than they’ve ever been. SDSU smashed an FBS school, Colorado State, in its season opener this year and it barely registered as an upset. Many of the aforementioned schools that have moved up to FBS have had success and regularly play in bowl games.

But outside of NDSU and SDSU, Montana and Montana State, who are the heavyweights of what’s left in FCS? Villanova? They play in a glorified high school stadium. Basketball is their priority. Eastern Washington? There’s been talk of cutting or demoting that program. Delaware? Kennesaw State? Those teams would have trouble with the best the NSIC has to offer.

And that’s the thing: while the top teams in FCS look more and more like FBS programs, the level of play in the bottom third of FCS isn’t any better than Division II football, and with more and more teams moving up to FCS from Division II, that trend may continue. Still, nobody is sounding the alarm about FCS’s future just yet.

“I feel good about (FCS football),” said Montana State athletic director Leon Costello. “If you look around the landscape, there’s been a couple teams that have left but I think that’s been more due to internal factors for those specific institutions. The upper echelon of FCS is still really good, and that’s why I like it. It’s very competitive. We’ve got a great playoff system that crowns a true national champion. We’ll all have more information in the coming weeks when we see what direction the NCAA is going to take, but I can tell you that we’re never going to do something that other people are forcing us to do. We’re going to do what’s in the best interest of Montana State.”

That’s what everyone says, of course. But when USD and UND followed their rivals from SDSU and NDSU to Division I, it was at least somewhat a reactionary move. Eventually, Omaha came to the same conclusion, though they dropped football to do it.

NDSU and SDSU made the move to Division I two decades ago because they saw they were outgrowing Division II. Could they be in danger of outgrowing FCS football already? Maybe, but that doesn’t mean a move up to FBS is a good idea, because it’s not like you’re jumping into the Big Ten or playing your games on Saturdays on network TV.

“If you make that move, is it really a move up, or a move to a different place where you just spend more money,” asks SDSU athletic director Justin Sell.

“If we go up, how does that benefit us?” Herbster said. “Do we anticipate greater crowds? Great exposure? Greater notoriety? Honestly, we haven’t answered any of those questions. Right now you can look around the landscape and some of the schools that have moved up have been head-scratchers to me.”

“Nobody wants to go backwards”

To be clear, while the Bison are obviously more than ready to play at the FBS level from a competitive standpoint, there’s no indication a move is imminent, as NDSU faces challenges in making the move due to geography.

Namely, there isn’t a conference that’s a particularly good fit. The Mountain West is the one most often floated by Bison fans and media, but that league extends to California (well, Hawaii, actually) and the closest school to Fargo is Colorado State, some 800 miles away. Not ideal. The MAC (MidAmerica Conference) isn’t all that attractive. That league may offer 85 scholarships, but there’s little to suggest those teams are actually better than NDSU (or SDSU, for that matter).

But change could be coming to college football that may hasten decisions for its member schools, particularly in Division I. The NCAA will vote on a new constitution later this month at the NCAA convention, and one of the major tenets of the new draft would be to give each division the power to govern itself.

In Division I football, the FBS level has had its own issues with competitive balance as the richest schools and top conferences (namely the SEC) dominate the sport. Could FBS split into two? Would the Power 5 conferences form their own governing body and break away from the non-power conferences (or Group of Five, as they’re informally called)? If they did, would each entity have its own playoff? And under that scenario, what would happen to FCS schools? It’s all speculation at this point, but at the very least, expect that SDSU and USD would want to remain in the second tier of college football, whether that meant the status quo or some kind of new class that might be a hybrid of FCS and Group of Five teams.

“Nobody wants to go backwards,” Herbster said. “We’ve climbed too far to even think about sliding back. If that’s something we need to work for then that’s what we do. Those that have recently made that transition understand where we came from and where we are now, and we’re not going back.”

Sell floated the idea of a 70-scholarship classification (right now FCS offers 63 and FBS 85) that would presumably include Group of Five teams not able to compete with the SECs and Big Tens of the world and the top teams in FCS. Would that level have a playoff system? Be part of a bowl alliance? Anything seems possible right now.

But Sell and his coach, John Stiegelmeier, agree on one thing – they may not be tied to NDSU and they may not be interested in a move to the FBS level, but if radical change comes from the NCAA’s new constitution, they’ll be prepared. The bottom line for both of South Dakota’s Division I schools: If FCS becomes the equivalent of Division II, they want no more part of it than NDSU does.

“We want to compete at the highest level our capability allows us,” Sell said. “The FCS is good right now. We have quality teams, our playoffs are awesome and we’re producing NFL-caliber kids that are linked to our universities. But we can’t be blind to continuing those conversations of how do we strengthen what we’re doing in football. Nobody wants to go backwards. My job is to make sure we build a really good program and be part of a good league and if you do that, at the end of the day you’re always going to be wanted.”

This article originally appeared on Sioux Falls Argus Leader: FCS: With NDSU dominating and others leaving, what’s future of league?

Latest NFTs from the sports world — Magic Johnson with Top Shot, Wayne Gretzky partners with eBay and the return of Mars Blackmon

Latest NFTs from the sports world — Magic Johnson with Top Shot, Wayne Gretzky partners with eBay and the return of Mars Blackmon