Yes, you can cook ice cream in an air fryer. And it’s delicious 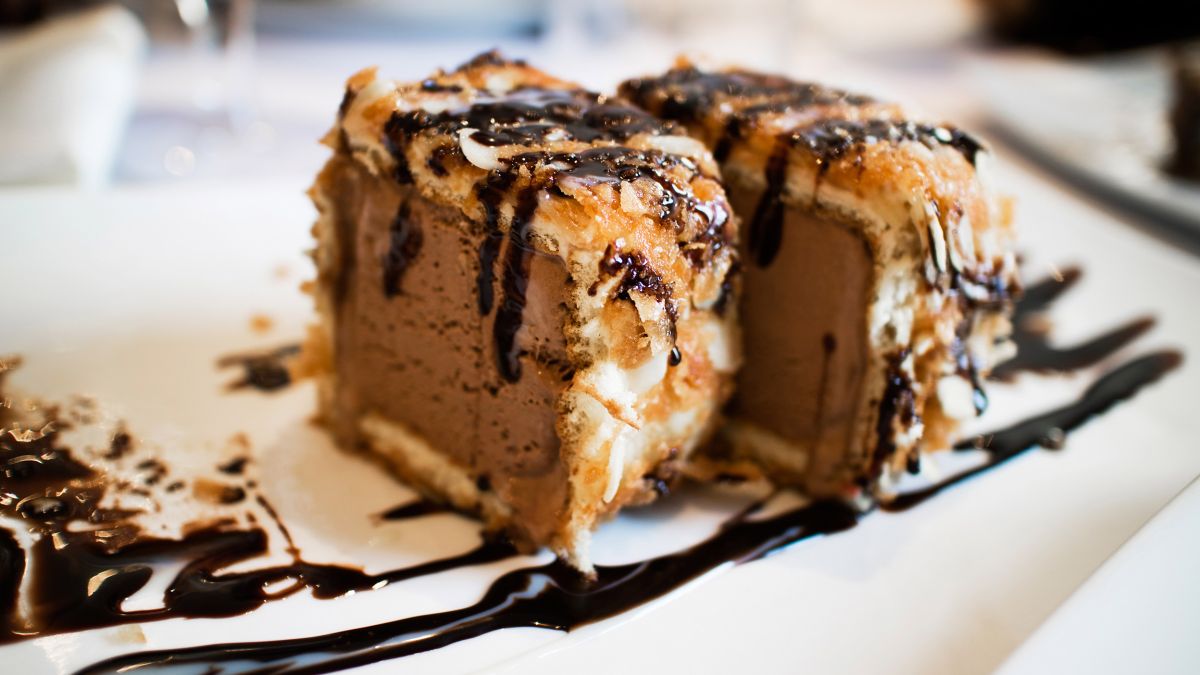 When it comes to food that can be cooked in an air fryer, fries and chicken wings spring to mind. However, the kitchen gadget is great for sweet treats like brownies and donuts too. So what about ice cream?

Before you write me off as crazy, hear me out. Deep-fried ice cream is a popular dessert often served in Mexican restaurants. Balls of the creamy frozen treat are covered in a crunchy coating and deep-fried for less than a minute to create a warm, crisp shell while the ice cream remains safely intact.

My first taste of deep fried ice cream was a few years ago when I was on holiday in the Caribbean, but as I don’t own a deep fat fryer  – in part to stop me indulging in this style of treats too often – so it’s never something I’ve attempted to recreate at home.

Until now, that is. Spurred on by my success of making Krispy Kreme style donuts in an air fryer, I began to wonder if I could also use an air fryer to make a healthier version of deep-fried ice cream.

Read on to discover what happened when we attempted to make deep-fried ice cream in an air fryer – or, if you’ve already decided you want to invest in this handy kitchen appliance, check out the best prices on the best air fryers we like right now:

It’s all about the coating

The ice cream I had enjoyed on holiday was covered in a batter before being deep-fried. Unfortunately, food covered in batter is one of the few things that can’t be prepared in an air fryer, as the thick liquid runs off whatever was initially dunked in it, and makes a mess of the frying basket.

When I used an air fryer to create chicken that rivaled KFC, crushed cornflakes proved to be the best coating to offer a crunch alongside an appetizing golden color, so it made sense to use them to coat my ice cream.

Following some research, I also discovered that crushed graham crackers (or digestive biscuits if you’re in the UK) were being used to coat the ice cream instead of batter. Cookies and Creme is one of the top 10 most popular ice cream flavors in the US, so while pairing well with the ice cream, I thought cookie crumbs would also tick the box for creating a crisp shell, so I decided to put both to the test.

In terms of a recipe, this ice cream dish is so simple I didn’t think I needed to rely on one. I opted for vanilla ice cream, as that’s what I’d had on holiday and then decided to follow the same steps I would when coating chicken by dipping the ice cream balls in beaten egg, followed by the cookie and cornflake crumbs.

Just like with chicken, I decided to double-coat the ice cream, as I know how fragile the coating can be, and given the ice cream would start to melt as it heated up, I wanted to give the coating the best chance possible not to slip off.

I also decided to roll the ice cream balls in flour first to help the egg stick and place the balls in the freezer for a couple of hours after coating to ensure they were as solid as possible.

While I felt confident in my knowledge of how to make the coated ice cream balls, I wasn’t sure what timing and temperature to use. So I did some more research, but this time on air fryer ice cream recipes – it turns out plenty of people have already tried to make the dish in an air fryer.

This research, coupled with my previous experience cooking with the appliance – for example, when I discovered that cooking cinnamon rolls in an air fryer is better than my usual method – meant I settled on a cooking temperature of 392 F / 200 C degrees and a duration of two minutes.

I pre-heated the Instant Vortex Plus, which is currently top of our best air fryers list, and then placed the ice cream balls, which had been coated and placed in the freezer a few hours before, onto a small sheet of parchment paper  – so should the worst happen and the ice cream melt, at least my air fryer wouldn’t end up a total mess . I then placed this in the air fryer basket.

Finally, I spritzed the balls with a couple of squirts of spray oil to aid the browning process and placed the frying basket in the air fryer.

Part way through cooking the air fryer alerted me that it was time to turn the contents of the basket, so the hot air can reach every inch of the food to ensure a crisp finish. However, I decided to ignore this alert, as I didn’t want to risk damaging the already-delicate ice cream balls.

Once the cooking time had elapsed, I was thrilled to see the ice cream hadn’t melted and the shells were still crisp. However, while the cornflake coating was still intact, the cookie crumbs had slid off the ice cream balls – so cornflakes were the clear winner in terms of a crunchy shell.

I grabbed a spoon and tried one of the cornflake-crusted ice cream balls. It was creamy but didn’t quite taste as delicious as I had expected. After a few more bites it became clear, the cornflakes weren’t sweet enough to satisfy my sugar-craving, so I decided to rethink the coating.

Honey & Nut Corn Flakes (or Crunchy Nut Cornflakes in the UK) are cornflakes but sweeter thanks to the addition of honey, while the chopped nuts add additional crunch. Ice cream and nuts go well together, which led me to wonder if this sweeter cereal could potentially elevate this desert and make it taste as good as I remembered.

When this batch finished cooking, it was clear I’d cracked it. The coating was crisp and crunchy, while inside the desert was soft, but not melting. The sweet shell married perfectly with the vanilla ice cream, too.

Not only does this dessert taste great, these air-fried ice cream balls will also blow the minds of any dinner party guests you may have. I’ll certainly be making this a go-to dish when I never have people over for dinner, especially given it’s healthier and safer than deep frying too. It’s definitely worth trying for yourself too.